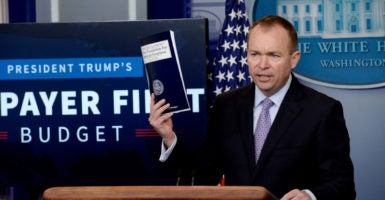 The proposal sends a strong message to Washington that the president intends to jump-start the country’s lagging economy and reign in the size and scope of the federal government.

If implemented by Congress, the plan could spark economic growth not seen in more than a decade and put the country back on a sustainable fiscal path.

Here are nine key aspects of the plan.

Balancing the budget within 10 years is a benchmark that congressional Republicans have and should continue to strive for. None of the budgets submitted by the Obama administration ever balanced, and instead added $10 trillion to the national debt.

This budget takes a major step in the right direction by reaching a surplus of $16 billion in fiscal year 2027.

On the other hand, it is concerning that there are not more concrete cuts spelled out within the president’s proposal. The budget lists a total of $3.6 billion in cuts. It attributes another $2.1 trillion in savings to “economic feedback.”

These projections are a key ingredient in getting the debt under control and reaching balance by 2027. The growth projections have two flaws and one strength.

The second flaw is that the plan expects the president’s policies to sustain growth rates at the outer limit of pro-market optimism despite unfavorable demographics. The president’s economic projections do have a major data point in their favor: They represent a return toward the long-run trend in per capita gross domestic product.

That deviation from trend is partly to blame on the stultifying economic policies of the previous decade. Removing those constraints will be the first step in restoring the income growth to which Americans are long accustomed.

With the right policies, 3 percent real GDP growth could be within the realm of the feasible. It would certainly be desirable. A restoration of growth will not, however, follow automatically from enacting the president’s agenda. A lot of other things will have to go right as well.

The president’s plan to eliminate the deficit and control the debt should not have been made so dependent on things outside his control. Limiting the growth of entitlement spending would be a more certain path to balance than relying on historical forces.

The Heritage Foundation’s 2018 budget proposal, “Blueprint for Balance,” would cut total federal spending by more than $10 trillion over 10 years and balance the budget in seven years, without relying on economic feedback to do so.

Scaling back the size and scope of domestic programs is critical to enhancing individual and economic freedom. Over the past several decades, through lack of oversight and fiscal discipline, these programs have ballooned in size and many no longer serve their original purpose.

Many of these programs fall outside of the proper domain of the federal government, and reducing or eliminating them will empower state and local governments as well as the private sector, and in many cases serve those citizens who use those services more effectively.

Whether Congress adopts the president’s discretionary proposal in full or not, it sets the tone for the debate as we move toward yet another spending battle over fiscal year 2018 appropriations in the next few months.

The president’s budget would add an additional $54 billion in base budget authority for defense spending in 2018.

More importantly, it would eliminate the defense and nondefense spending firewalls imposed by the Budget Control Act of 2011 and more than offset increases to defense spending with cuts to domestic programs.

Still, the proposal could go further. Heritage Foundation experts have proposed an additional $29 billion in base defense funding for fiscal year 2018.

This will help to increase the military’s dangerously low end strengths, improve readiness, and protect the country from increasing threats around the world.

In fiscal year 2018, the president proposes spending $1.065 trillion on base discretionary spending, in line with the Budget Control Act caps.

Through 2021 (the expiration of the discretionary caps), the budget would propose spending $170 billion less than current law estimates. Over the next 10 years, the plan would reduce total discretionary spending by more than $1.2 trillion compared to current law.

6. Repeals and replaces Obamacare and its taxes.

The president’s budget assumes that the Obamacare repeal and replace bill that passed the House of Representatives earlier this month will become law, saving $1.25 trillion over the next decade.

Unlike past congressional budget proposals, it also assumes that $1 trillion in damaging tax increases imposed by Obamacare will be repealed, saving a net $250 billion.

7. Makes progress on some mandatory reforms, but ignores biggest drivers of debt.

Including the aforementioned cuts to Obamacare, the budget would cut mandatory spending by more than $1.7 trillion by 2027. This includes major and much-needed reforms to programs like Medicaid, the Children’s Health Insurance Program, federal welfare programs, and student loans.

However, other than disability insurance, it does nothing to address Social Security and Medicare, which, along with interest on the debt, are projected to consume almost 85 cents of every additional dollar of federal spending in the next 10 years.

It will be very challenging, if not impossible, to sustain a balanced budget and keep debt on a downward path without reforming these programs and ensuring their long-term sustainability for those who need them the most.

8. Increases spending in other mandatory programs.

Trump has long promised that he would propose a $1 trillion infrastructure spending plan to rebuild the nation’s roads and bridges. Included within his budget proposal is an additional $200 billion in spending that would help to reach this goal through a combination of public and private investments.

The budget also establishes a paid parental leave program, which is projected to cost $19 billion over the next 10 years. Establishing a new entitlement program sets a bad precedent and could put more strain on already limited resources.

Finally, the budget would spend $29 billion to extend the Veterans Choice Program, which is intended to provide access to private care for our nation’s veterans.

While ensuring quality health care for veterans is important, it should be done in a responsible and efficient manner and provide care to those who need it the most—especially veterans with service-related conditions, and who have limited options outside of the VA health system.

A month ago, Trump proposed a true tax cut for the American people. The president’s budget outlines a simplified version of his previously released plan without many of the specific rates and provisions.

The budget calls for lower tax rates for individuals, investors, and businesses, and eliminating special interest tax breaks. The budget also calls for eliminating the estate tax, but the tax is still included as raising revenue, so the ultimate treatment is unclear.

The plan assumes revenue sufficient for a deficit-neutral reform, after including revenue reductions from Obamacare repeal—yet it does not spell out exactly how this would be accomplished in the new tax code.

It seems that the proposed tax reform relies heavily on the assumed 3 percent growth rate to make up the lost revenue from lower tax rates.

The feasibility of the assumed 3 percent annual growth rate is highly dependent on the ultimate design of tax, regulatory, and other reforms—but we should continue to be optimistic that the economy is indeed able to sustain such growth.

>>> Trump’s Tax Proposal Is a Strong Starting Point for Reform

Regardless, updating the tax code while lowering tax rates for all Americans does not need to rely so heavily on economic growth. In combination with spending cuts, Trump and Congress can provide tax and spending relief for the American people.

While Trump’s budget is not without flaws, it makes progress toward and includes a number of important conservative priorities. If implemented, it could spark economic growth and get the nation’s skyrocketing debt back under control—a key priority as we hover around $20 trillion in national debt.

It is now up to Congress to work with the president to enact a strong budget that puts the nation’s fiscal future on the right course.