Trump’s Tax Proposal Is a Strong Starting Point for Reform 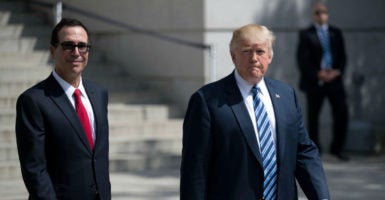 President Donald Trump’s tax plan announced on Wednesday shows that he is serious about his campaign promise to cut America’s taxes.

For too long, the American economy has been held back by an outdated tax system. Trump’s promise to lower tax rates and update the tax code will benefit all Americans.

Chief among the proposed reforms is lowering tax rates for businesses and individuals. Lowering the business income tax rate to 15 percent has rightly received the most attention.

Currently, Americans pay a federal corporate income tax rate of 35 percent—one of the highest in the world. Because businesses are made up of people, it is those Americans who work for and invest in American companies who actually pay the tax.

In fact, most of the recent economic research shows that workers actually bear a majority of the tax in the form of lower wages.

High business taxes make it harder for businesses to invest in new equipment, factories, and research and development. Slower investment caused by high and distortionary taxes has limited job creation and wage growth.

A 15 percent business tax rate would reverse some of these negative effects, helping to re-energize economic growth. The U.S. would be a more attractive place to do business. At 15 percent, the U.S. could have a tax rate well below the average of our major trading partners.

Lowering tax rates is necessary if America wants to compete for global business. Allowing for the immediate deduction of the full cost of capital purchases would make the United States one of the most attractive places in the world to do business.

Full expensing, currently not included in the president’s proposal as presented to the public, would simplify the currently complex and economically harmful system of depreciation and would encourage additional investment, job creation, and economic growth by treating all business costs equally.

The president has also proposed reducing tax rates and consolidating brackets for individual wage income. These reforms, along with repealing the death and the alternative minimum taxes, will rightly allow Americans to spend more of their own money and send less of it to Washington.

The lower rates for businesses and individuals should be applied consistently by eliminating targeted deductions, exclusions, and credits.

Tax reform should not expand or create new tax subsidies. While many special tax breaks are on the chopping block, the proposal adds a new tax subsidy for child and dependent care.

This addition should be reconsidered as it will provide benefits to some taxpayers at the expense of others, while introducing additional and unnecessary complexity.

Responsibly updating the tax code could, however, present a challenge for the federal government’s budget. Absent cuts to Washington’s profligate spending, large tax cuts could balloon the national debt.

But the impact on the deficit may not be as significant as some critics will likely assert.

Indeed, reforms to business taxes could over time make up for a large share of the lost revenue. That’s because tax reform will allow for economic growth, which will in turn generate additional tax revenue.

Further, a low rate and the proposed territorial system will reverse the tide of businesses leaving the U.S., which ensures a more stable tax base and translates into additional revenue.

If the plan includes full expensing, America could become a leader in global business tax environments—allowing businesses to shift income, production, and the resulting tax revenue back into the U.S. Eliminating targeted tax breaks will also help pay for lower rates.

Nonetheless, the changes proposed by the president will have significant negative effects on the U.S. deficit unless they are coupled with near-term spending reforms.

The fact is that budget deficits are the result of uncontrolled spending, not insufficient taxation. The IRS actually took in almost $3.3 trillion last year, more than the historical average, yet the government still ran a deficit well over $500 billion.

Holistic tax reform should be done by taking into account both revenue and spending.

Opponents of tax reform will criticize reform as not “revenue neutral.” This constructs a false choice between otherwise pro-growth tax reform tied to additional revenue raisers, and no reform at all.

Entitlement and discretionary spending reforms are the only way to make tax reform sustainable in the long run. Even absent tax reform, without spending-based reforms deficits will continue to grow, requiring still higher taxes in the future.

True reform should apply the most efficient and least economically destructive forms of taxation, have low rates on a broad base that eliminates the double taxation of investment, and be transparent, predictable, and simple.

If Congress and the president take hold of this significant opportunity, their efforts could result in one of the greatest tax reductions in American history—allowing American families to keep more of the money they earn, instead of sending it to Washington, and creating far-reaching benefits for all Americans by growing the economy.