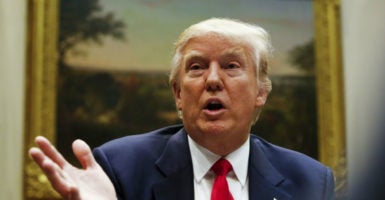 This slim budget reprioritizes defense spending and reverses eight years of Obama-era shifts in spending from a core constitutional priority toward the president’s domestic pet projects. Federal agencies, beware: The era of fiscal profligacy may be coming to an end, and quickly.

Trump’s first budget plays a key role in the congressional budget process. This skinny budget is only part one. It focuses on the one-third of the budget for which Congress appropriates funding every year, called “discretionary” spending.

The president will reportedly issue his first full budget in May. In addition to discretionary spending, the full budget will include mandatory spending (the so-called entitlement programs) as well as a tax plan and other policy proposals.

Cuts to discretionary spending are critical to reducing the size and scope of the government and enhancing individual and economic freedom. They also make an important down payment toward the federal deficit and debt.

Instead of across-the-board reductions such as the ones included in the 2011 Budget Control Act, the president’s proposal includes smart cuts to “drain the swamp” by weaning special interests from feeding unfairly from the federal trough.

The proposal would also make progress in streamlining the bloated federal bureaucracy, and would empower the private sector—as well as states and localities—by getting the federal government out of areas that are not within its proper domains.

In combination with the president’s actions to reduce harmful regulations, the proposal helps to rein in federal bureaucrats whose overzealousness has caused significant harm to private property rights and the economic freedom of American families and individuals.

Such a targeted approach will help to unleash innovation, economic growth, and jobs that have been hindered by Washington overreach. It’s due time to cut the federal government down to size, and Trump’s proposals make significant strides in this direction.

My Heritage Foundation colleagues and I have identified more than $80 billion in domestic discretionary cuts that could be made right away. Our congressional budget proposal lays out in great detail where and how those cuts can be made.

>>>Blueprint for Reform: A Comprehensive Policy Agenda for a New Administration in 2017

We are pleased to see many of these very same proposals reflected in the president’s plan.

It is encouraging that the proposal would fully offset any increase in next year’s defense spending with cuts to domestic programs. Worrisome, however, is that this year’s defense boost would only be partially offset, increasing discretionary spending in fiscal year 2017 by $10 billion.

Trump should set a positive precedent this year by offsetting any new spending with spending cuts elsewhere.

Entitlement reform must follow closely behind the president’s efforts to cut and streamline the federal bureaucracy.

Congress should work with Trump to return accountability to Washington and cut the federal government down to size.

If they can succeed in reining in Washington bureaucrats and draining the swamp, they can develop more trust with the American people to tackle the nation’s bigger fiscal challenges. The future of the nation depends on them.

Note: This article has been updated to clarify the author’s view of government’s proper domain.