House Republicans to Move Forward on Spending Without a Budget Number 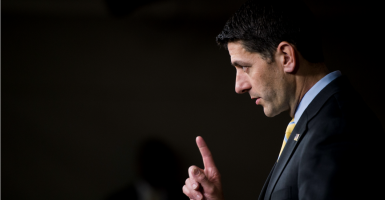 Months of gridlock may be over. House Speaker Paul Ryan couldn't get Republican lawmakers to agree on how high a budget to pursue. So it appears they've decided to skip it. (Photo: Bill Clark/CQ Roll Call/Newscom)

GOP leadership will not bring a budget plan to the floor next week for a vote, McCarthy’s office told Politico Thursday afternoon. And without a budget resolution, the House Appropriations Committee can begin moving individual spending bills after May 15, which was the deadline.

An aide in House Speaker Paul Ryan’s office had told the The Daily Signal on Wednesday that all options were on the table to finish a budget.

Leaders of the Republicans’ major congressional factions were evaluating a full menu of parliamentary procedures.  Four options had dominated discussion:

1. The Bypass: No Budget

Next week, House Republicans likely will make history by skipping arrival at a budget number and moving straight to the appropriations process, if McCarthy’s stated position plays out.

Technically, the 1974 Congressional Budget Act doesn’t require Congress to pass a budget resolution before allocating money for specific purposes. After May 15, the act allows lawmakers to move individual appropriations bills regardless of whether there’s a budget.

It wasn’t clear before Thursday that Ryan, R-Wis., would go along with this unusual two-step, though, until McCarthy’s statement.

Ryan had remained adamant that the House should pass a budget and follow regular order in doing so. Still, the speaker allowed Appropriations Chairman Hal Rogers, R-Ky., to draft spending bills at the $1.07 trillion level that conservatives reject as too high.

But the bypass maneuver could happen by default if Republicans don’t reach an agreement before May 15. Rogers has indicated he is prepared to bring appropriations bills directly to the floor.

That move had received mixed reviews among conservatives.

In March, Reps. Cynthia Lummis of Wyoming and Thomas Massie of Kentucky said they would support the bypass to get the appropriations process off the ground.

But Rep. Jim Jordan, R-Ohio, former chairman of the conservative House Freedom Caucus, rejected the idea. Jordan stressed the need for a spending proposal at the $1.04 trillion level, $30 billion less than leadership’s number.

For more than a month, some conservatives have said they could stomach higher spending in exchange for $30 billion worth of cuts to mandatory entitlement programs like Medicaid and Medicare.

The so-called “sidecar” could facilitate this quid pro quo transaction. Conservatives would get on board with a $1.07 trillion budget, according to the plan, if leadership couples a sidecar savings package to separate, non-budget legislation.

The Republican Study Committee first introduced the idea in February. It seemed leadership had begun to look favorably on the compromise after a closed-door conference meeting last week.

Chairman Bill Flores, R-Texas, told The Daily Signal in an email that his group believes the “budget should be at the $1.040 trillion” but could support “a $1.070 trillion spending level with at least $30 billion of actionable mandatory spending savings.”

But there’s fear in some conservative circles that such a sidecar could get derailed in the Senate.

To keep that from happening, Rep. David Brat, R-Va., and other members of the House Freedom Caucus want to tag the sidecar “onto something that’s a must pass.”  Brat noted that a Puerto Rico debt relief package could be an ideal vehicle.

“In the last week, with a crisis imminent as usual, we can’t go for gimmicks we have to go for something that’s certain,” Brat said. “Basically, the certainty is that the sidecar has to be woven into mandatory reforms or something that will be attached to the budget.”

Lawmakers always could introduce alternative budget proposals directly on the House floor. But without some sort of compromise such as a sidecar, this option seems unlikely to succeed.

By withholding their support, conservatives already had bottled up Rep. Tom Price’s proposal in the Budget Committee, although it passed there. Unless leadership cuts a deal, it’s not likely that budget, at the $1.07 trillion level, could attract the 218 votes needed to pass.

But it’s not unprecedented for lawmakers to float aspirational budgets on the floor.

Last year the Republican Study Committee introduced a beefed-up conservative budget that slashed trillions in spending and balanced the budget in five years. Though it failed, the proposal attracted 132 votes.

4. Queen of the Hill

To break a budget impasse, the procedure allows consideration of multiple plans at once. In turn, members have the opportunity to vote for and against each budget on the House floor.

Whichever achieves a majority and gains the most votes would win passage. If no plan succeeds, the House would simply revert back to the $1.07 trillion spending level that conservatives find odious.

“It’s fair, it’s transparent, and it’s regular order,” Rep. Charlie Dent, R-Pa., told The Daily Signal, referring to the Queen of the Hill procedure. “Essentially, it allows every group of members to present their thoughts and ideas on a budget … everybody has an opportunity to present a budget.”

But Dent, chairman of the more liberal Tuesday Group, admitted that “the outcome would likely be a $1.070 trillion appropriations number.”

Both Flores and Jordan rejected that option when speaking with The Daily Signal, saying the royal maneuver could result in that higher spending level.

Dent described conservatives who are reluctant about voting for a Queen of the Hill as “folks out there who say they’re ready to take their marbles and go home if they don’t get their way.”