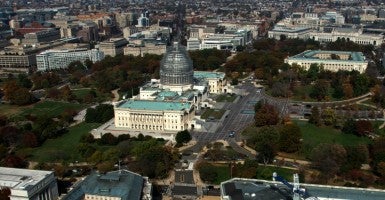 The 2016 budget season kicked off last week with a particularly bleak forecast. The Congressional Budget Office (CBO) warned that the deficit in 2016 will be $130 billion higher than projected last August. Over the next nine years, deficits will be $1.5 trillion higher. And by the end of the next ten years, an additional $9.9 trillion will be added to the national debt that has already exceeded $19 trillion.

I have good news, though. Congress and the president are to blame. No, really, that is good news. Because it also means that our fiscal course can be reversed. Here are a few statistics to prove my point.

The projected deficit in 2016 would have fallen by $34 billion if only Congress had funded the government at the spending levels agreed upon in the Budget Control Act and then taken an extended vacation from August to December. Meanwhile, the ten-year deficit would be about $840 billion lower, or a little less than 10 percent lower, all things equal.

But that doesn’t even include all the fiscal damage inflicted last year. Legislation enacted in 2015 will add a little over $1 trillion to the debt over the 2016 to 2026 period.

Next week, the president will release the final budget of his administration. If it is anything like the last seven budgets, it will continue down a fiscal course of even more debt and double down on policies that expand the scope of government. And just a few short weeks later, Congress will begin preparing its budgets. Conservatives in Congress must use the budget to make a stand on principles while showing the American people the direction they want to take the country.

Budgets delineate priorities, reflect principles, clarify positions on fundamental issues, express views on the role of government, and provide insights into our deep moral character. Budgets are also illustrative of our commitment to individual rights, economic freedom, and prosperity. And the constitutional provision of budgetary powers to Congress is critical to maintaining those individual rights.

Congress should write a budget that is committed to reducing the size and scope of government. As President Ronald Reagan put it several weeks after releasing his 1981 budget, cutting spending and taxes “is only the first step toward returning the power to the States and communities, only a first step in reordering the relationship between citizen and government.” Congress has the opportunity in its budget, and the appropriations process that follows, to “make government responsive to the people.”

This will require a course reversal by Congress. The American people are ready.

Last October, outgoing Speaker Boehner negotiated a deal with Obama to bust the budget by allowing for an additional $80 billion in discretionary spending beyond the caps set in the 2011 Budget Control Act.

Congress should not bless the Boehner-Obama spending agreement in its budget. The Boehner-Obama budget-buster passed Congress with only 79 House Republicans voting in its favor and should therefore not be a part of any budget written by the majority. Furthermore, the budget should abandon arbitrary limits on defense and non-defense spending and replace them with an aggregate limit on discretionary spending in 2017, as promised with last year’s budget.

Congress must then act on its budget by passing appropriations bills that reflect the priorities of the American people—not bills that provide preference to the president or the minority party in Congress. Congress should hold the administration accountable by providing fewer resources to agencies that engage in unlawful activities or overly expansive power grabs.

Congress should pass legislation that brings current law into compliance with congressional budget plans. The American people have lost trust in Washington, in part, because their representatives in Congress say one thing and do another. Congress must end the practice of using budget gimmicks to mask overspending and using parliamentary process to make excuses for not making ground on the policies it was elected to pursue. By reducing debt and putting the fiscal house in order, we can produce a strong economy, a strong society, and a strong America.

In defending his budget thirty-five years ago, Reagan finished his speech by asserting that “now we have the opportunity—yes, and the necessity—to prove that the American promise is equal to the task of redressing our grievances and equal to the challenge of inventing a great tomorrow.”

Congress has the opportunity to stand up for the principles of the American people during this budget season.