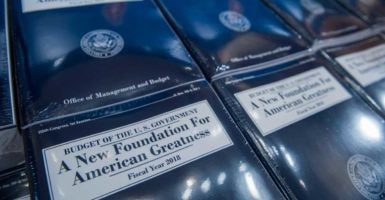 After months of delays, the House Budget Committee has released its fiscal year 2018 budget resolution.

The plan makes progress in some areas, such as prioritizing national defense, reforming Medicare, implementing mandatory reforms through reconciliation, repealing Obamacare, and beginning to reform the Department of Veterans Affairs.

However, the budget falls short in others.

1.) Balances the budget. The proposal would reach a surplus of $9 billion by 2027. Over 10 years, it would reduce total federal spending by $6.8 trillion compared to the Congressional Budget Office’s latest projections. In total, federal debt held by the public would be over 30 percent less than CBO estimates as a share of the economy.

2.) Proposes mandatory reforms through reconciliation. The House budget instructs 11 authorizing committees to identify $203 billion in savings that would be implemented through the reconciliation process. It would also instruct the House Ways and Means Committee to pursue legislation rewriting the nation’s tax code.

The inclusion of meaningful mandatory savings that, unlike the budget resolution itself, would actually become law is an acknowledgment of the nation’s unsustainable fiscal path.

Congress should follow the committee’s lead and enact these savings this year.

Moreover, Congress should continue on this path of implementing savings in every congressional budget.

3.) Prioritizes defense. The House budget would eliminate the defense/nondefense firewall created by the Budget Control Act and provide $621.5 billion in base defense funding, about $73 billion above current law and higher than the president’s request. The plan also calls for an additional $87 billion in funding for the global war on terrorism. Over the next seven years, the budget would phase out additional funding for the global war on terrorism.

4.) Repeals Obamacare and its taxes. The budget assumes that the American Health Care Act, passed by the House in May, will be enacted, repealing and replacing Obamacare. Unlike past budgets introduced by the committee, this proposal also assumes that the taxes associated with Obamacare will be repealed. The taxes and regulations associated with the law have been damaging to individuals as well as job creators and ensuring their full repeal is a much-needed shift from past budgets.

5.) Begins to address veterans reforms. The Department of Veterans Affairs has been plagued by mismanagement issues that have prevented vulnerable veterans from getting the care that they deserve.

For the first time, the House budget proposes making modest reforms to the VA. The budget calls for the VA to implement Government Accountability Office recommendations to ensure that its resources are being used efficiently to improve the lives of veterans.

It also calls for additional savings to be realized by cracking down on improper VA payments and making sure funds are going to those who rely on them the most.

6.) Relies on $1.5 trillion in macroeconomic growth effects. The past several congressional budget resolutions have relied on the CBO to determine the economic growth assumed in the budget.

However, this year the committee has instead developed its own assumptions, which are accelerated compared to those assumed by the CBO.

While it is true that reducing spending and implementing pro-growth tax and regulatory policies are critical to unleashing the economy, economic growth depends on many variables that are outside of Congress’ control. Therefore, growth should not be relied on so heavily to balance the budget.

Instead, the budget should implement greater reforms that will reduce the footprint of the federal government, increasing economic opportunity in the private sector and devolving responsibilities back to state and local jurisdictions.

Congress has passed bad budget deals and used gimmicks to continually circumvent the caps. This budget would spend an additional $183 billion on discretionary programs through 2021, the year in which the Budget Control Act expires.

Defense is a core constitutional function of the federal government, and it should be provided for responsibly, and within the overall spending restraints imposed by the Budget Control Act discretionary spending cap.

The budget fails to offset defense spending increases with reforms to domestic programs. In 2018, it only proposes $5 billion in cuts to nondefense programs.

The Heritage Foundation’s “Blueprint for Balance” identified $87 billion in savings that could be implemented in 2018 alone. With federal debt at $20 trillion and the federal government overextended in too many areas, tough choices must be made.

For 2018, it capped total CHIMPs at $17 billion. However, the most recent budget proposal goes back on that commitment and raises the total CHIMP savings allowable in 2018 to $19.1 billion.

This accounts for nearly half of the $5 billion in nondefense discretionary savings that the committee proposes in 2018. The Senate also already has a CHIMP limit of $17 billion in place, meaning that if this level were adopted it would trigger a point of order in the Senate.

CHIMPs are one of the most frequently abused budget gimmicks. They are used to circumvent statutory budget caps and often produce no real outlay savings. Instead of increasing the amount available to be used, Congress should immediately and completely do away with CHIMP savings that have no real outlay effect.

This budget would make much-needed reforms to Medicare and makes the program financially sustainable and preserves it for future retirees.

Unfortunately, it fails to make necessary reforms to Social Security. Delaying reforms comes at a high cost of imposing much greater changes in future years than would be necessary if reform began today.

Congress should adopt a plan that carefully prioritizes among federal programs, reduces the reach of the federal government into areas that belong properly within the purview of the private sector and state and local government, and puts all federal programs on the table for reform.

This budget is a start, and its $200 billion in proposed mandatory reductions through reconciliation make an important contribution to putting the budget on a path to balance. Overall, however, the budget offers too little, too late to truly rein in Washington’s uncontrolled spending addiction.