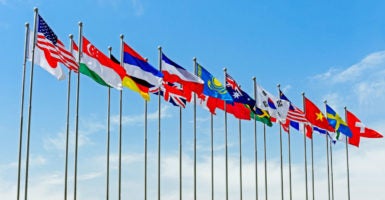 The revitalizing policies in the “2017 Global Agenda for Economic Freedom” will create good, new jobs for Americans and a freer flow of capital, goods, services, and ideas around the world. (Photo: iStock Photos)

In the decades since The Heritage Foundation began publishing its annual Index of Economic Freedom in 1995, the world has witnessed profound advances in economic freedom.

Open economies have led the world in a startling burst of innovation and economic growth, and political authorities have found themselves increasingly held accountable by those they govern.

Unfortunately, the United States has drifted downward in the index rankings—propelled by reckless government spending that has spiraled out of control and led to unprecedented budget deficits. The long U.S. slide has been marked by stagnant economic expansion and extremely sluggish employment growth.

So, in this important election year, The Heritage Foundation has dedicated its annual “Global Agenda for Economic Freedom” to a detailed examination of ways to improve Americans’ economic freedom and America’s positive impact on the global economy.

Here are 12 steps the next U.S. president can take in 2017 for more economic freedom in America and the rest of the world:

The revitalizing policies in the “2017 Global Agenda for Economic Freedom” will create good, new jobs for Americans and a freer flow of capital, goods, services, and ideas around the world.