Why Conservatives Are Unhappy With the Final Spending Bill 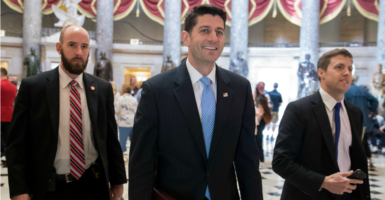 The House of Representatives, with 103 Republicans voting no, passed a $1.1 trillion spending package Wednesday to keep the government running through September.

Conservative lawmakers who opposed the omnibus spending bill in the 309-118 vote said they’re disappointed the final plan doesn’t reflect that Republicans hold the levers of power in Washington.

Republicans hold 238 seats in the House and Democrats hold 193. Four seats are vacant.

“I don’t think it’s a win for conservatives or for Americans,” Rep. Warren Davidson, R-Ohio, a member of both the Republican Study Committee and the more conservative House Freedom Caucus, told The Daily Signal in an interview before the vote.

But Davidson, who voted against the spending bill, did not decry it altogether.

The Senate, where Republicans hold 52 seats, was expected to vote later this week.

Conservatives tended to agree that Republicans scored points by securing $21 billion in new defense spending and $1.5 billion for border security, and by blocking new money for Obamacare and reducing the number of jobs at the Environmental Protection Agency.

Democrats, however, said their wins included adding $2 million for the National Endowments for the Arts and Humanities, securing health care coverage for retired coal miners and blocking Republican attempts to defund Planned Parenthood.

.@SenateDems are thrilled the bipartisan govt spending bill permanently addresses miners' health care – is exactly how govt ought to work.

There is a bright side and a dark side to the omnibus spending package, Rep. Raul Labrador, R-Idaho, said Wednesday at a monthly Capitol Hill briefing with reporters called Conversations with Conservatives.

“I do not see it as a win,” Labrador said, adding:

If you look at what happened, the negotiations started before we had the president and his Cabinet were in place. … So you’re not seeing a lot of the White House priorities in this bill, so I don’t see how we can say this is a win for the American people, or for the election that just happened. I could never call this actual spending bill a victory for conservatives or Republicans.

“I don’t see it as a win for conservatives,” Rep. Scott Perry, R-Penn., who also voted no, said at the conservative lawmakers’ meeting with reporters, which occurred before the vote. “While there are some good things in it that conservatives want, the hallmark things that most of us ran on are conspicuously absent.”

But Office of Management and Budget Director Mick Mulvaney said President Donald Trump had been able to change the spending package for the better, despite Democrats’ crowing.

Mulvaney said the lack of funds for Trump’s promised border wall was not a setback, especially since some of the new money is going to reinforce existing fencing. He told reporters in a White House briefing:

Keep in mind, building the border wall is not like building a wall at your house, OK … We would fix all those things anyway as we’re working our way to the new areas.  So I wouldn’t agree with the premise that this sets us back at all.  If nothing else, it actually helps us to fast-track where border security would be otherwise.

Republican lawmakers in the House and Senate have said they preferred to put off a fight with Democrats over beginning to pay for the wall until the fall, rather than as part of funding the government for the rest of the current fiscal year.

The official deadline for lawmakers to approve the spending package was Sept. 30, 2016, and Davidson bemoaned the fact that Congress has continued to rely on short-term packages rather than passing a budget on time.

“I think you should quit giving a pass to people for missing their deadlines,” Davidson said.

The last time Congress met its budget deadline was in 1996.

But during a press briefing Monday at the White House, Mulvaney said the Trump administration could influence the spending package because Congress had not finalized it on time:

“I feel very good about the wins that we got with the administration in this bill,” Ryan said Tuesday.

The spending package includes an additional $331 million for airport security, $2 million more for the National Endowments for the Arts and Humanities, and $137 million more for Customs and Border Protection, The Washington Post reported.

Rep. Justin Amash, R-Mich., who voted no, did not mince words in his assessment of the spending legislation beforehand:

“This bill … really didn’t push the conservative ball down the court very much, with the possible exception of the increase in defense spending,” Rep. Andy Harris, R-Md., a member of the House Appropriations Committee who voted no, said Wednesday.

In a commentary, Justin Bogie and Rachel Greszler, senior policy analysts at The Heritage Foundation, said the spending package was a missed opportunity.

“While the bill does make progress on issues like additional defense funding and increasing border security, it woefully fails the test of fiscal responsibility and does not advance important conservative policies,” they wrote.

Correction: This story originally had the wrong dollar amount for the $1.1 trillion spending bill.