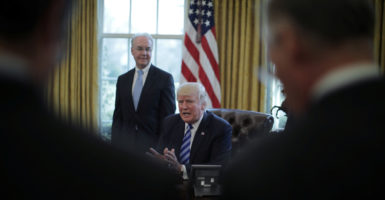 One of the hallmarks of President Donald Trump’s campaign was his promise to repeal and replace Obamacare. But as Trump nears his 100th day in office, he has yet to accomplish a key priority—passing legislation dismantling the Affordable Care Act.

Health policy experts say the blame for this setback lies with both Trump and Republican lawmakers. But the president’s situation also underscores the difficulty of gaining consensus within a fractured Republican Party and winning on an issue where Congress holds much of the power.

“I don’t think Republicans agree among themselves on what to replace the Affordable Care Act with,” Seth Chandler, a visiting scholar at the George Mason University’s Mercatus Center, told The Daily Signal. “I think the problem doesn’t lie so much in what Trump has done since being president. The problem is that there was a rash campaign promise made without really thinking through how it was going to be implemented.”

Trump frequently repeated his promise to repeal Obamacare on the campaign trail, where the billionaire developer said he would replace President Barack Obama’s health care law with “something terrific.”

It was a promise he further solidified in his “Contract with the American Voter,“ a campaign document outlining Trump’s “100-day action plan to make America great again.”

All the major GOP candidates made similar pledges, but even the president’s former advisers admit a promise to do it in 100 days was “ambitious”—although befitting Trump’s style.

“Thinking that you can get this done within the first 100 days is very Trumpian,” Ken Blackwell, the former Cincinnati mayor who led domestic policy for the Trump transition, said in a conference call with reporters Thursday. “I think we might be pleasantly surprised. He will get it done in terms of setting the framework and initiating the action to fundamentally change the way we’re dealing with one-fifth of our economy.”

Still, the president has exercised his executive authority and looked to his Cabinet, namely Health and Human Services Secretary Tom Price, to begin chipping away at Obamacare while Congress continues to debate the path forward.

On Jan. 20, his first day in office, Trump signed an executive order directing relevant agencies to waive or defer provisions of Obamacare that “impose a fiscal burden” on any state, individual, family, or other stakeholder.

In preparation for Trump’s 100th day, which falls on Saturday, the White House included that executive order in a list obtained by CNN touting the president’s “100 days of accomplishments.”

The executive order was designed to “set direction” for agencies overseeing the various provisions of Obamacare, Ed Haislmaier, who worked on health policy for Trump’s transition, said.

“That’s what executive orders are supposed to do,” Haislmaier, a senior fellow in health policy at The Heritage Foundation, told The Daily Signal. “They’re not going to get into the details of the policy, but it sets direction.”

In response to Trump’s directive, the Internal Revenue Service announced it would accept and process tax returns from taxpayers who declined to indicate whether they had health care coverage for 2016.

Typically, taxpayers have to check a box on their tax returns notifying the tax agency that they have “essential minimum coverage.” Those who do not may claim a waiver or exemption, or pay a $695 fine.

The IRS initially announced it wouldn’t process tax returns for Americans who failed to indicate whether they had insurance, were exempt, or were paying the fine.

But following Trump’s executive order, the tax agency decided to process the returns as usual.

Despite the action Trump has taken unilaterally, his promise to repeal and replace Obamacare hinges on congressional action.

So far, the president has yet to successfully shepherd a legislative package rolling back the health care law through Congress.

“But if you judge things by results, you have the right to say he hasn’t gotten done what he said he was going to get done,” he said.

Republican leaders introduced a health care bill, called the American Health Care Act, at the beginning of March. Lawmakers designed it to repeal major provisions of Obamacare—though not the whole law—and implement parts of a replacement.

Trump backed the legislation and, along with House Speaker Paul Ryan, outlined a three-step process for dismantling Obamacare—with two steps following passage of the bill.

But the legislation faced a significant setback just three weeks after it was introduced.

Conservative lawmakers in the House Freedom Caucus opposed the legislation, saying it failed to address the rising cost of health insurance premiums because it left too much of Obamacare in place.

The bill also earned the ire of centrist Republicans who worried the bill wouldn’t protect patients with pre-existing conditions and those who gained coverage under Obamacare’s Medicaid expansion.

But ultimately—and despite threats from the president and top administration officials—the Freedom Caucus stood strong in opposing the bill.

After it became clear that not enough conservative and centrist Republicans could be swayed, Ryan and Trump decided to pull the bill March 24.

The failure frustrated Trump, who at first said he understood it was a “hard vote” for conservatives but days later took to Twitter to condemn the Freedom Caucus.

But Chandler said the real issue lies in the fact that, as Trump admitted in February, health policy is hard.

Blackwell pointed to the welfare reform of the mid-1990s as proof that such legislative overhauls take time:

When you think about the fact that the health care system is a larger monster … to think you can get that done in 100 days as opposed to 18 months is quite ambitious. If it happens in 100 days, 180 days, 200 days, that will be remarkable.

The president can propose and Congress disposes. It’s a kabuki dance that is a real artform, and the president is showing he’s quite gifted in it.

Still, Trump hasn’t given up on pushing through legislation repealing and replacing Obamacare in the final hours of his first 100 days in office.

The House GOP’s efforts received a burst of momentum Wednesday after the Freedom Caucus announced it would support a revised version of the repeal bill.

Whether centrist Republicans back the measure, though, remains an unknown.

Still, the White House is pushing Ryan and House GOP leaders for a vote on the legislation Friday or Saturday.

If the measure were to pass the lower chamber, congressional Republicans would hand Trump a legislative victory just before the president hits Day 101.

A White House official told The Daily Signal that despite his promise to repeal and replace Obamacare within his first 100 days, the president remains committed to dismantling the “disaster known as Obamacare” and will continue working with Congress.

The Department of Health and Human Services

Price, the orthopedic surgeon and congressman from Georgia tapped by Trump as secretary of health and human services, has exercised his ability to make changes to the law through the regulatory process.

The Affordable Care Act, informally called Obamacare,  gave the head of the Department of Health and Human Services broad authority to implement and define parts of the health care law.

And Price has taken advantage of the precedent by the Obama administration.

The health agency launched a webpage devoted to keeping the public apprised of the regulatory and administrative steps it’s taking.

Included is a final rule issued last week designed to stabilize the insurance market for insurers.

Specifically, Price changed the length of Obamacare’s open enrollment period, implemented stricter verification procedures for patients to enroll in coverage during a special enrollment period, and allowed insurers to collect previously unpaid premiums before a consumer purchases new coverage from the same insurer.

Haislmaier, the Heritage health policy expert, said those on the transition team recognized that the rule stabilizing the insurance market needed to be done swiftly once the president was sworn into office.

“It was a substantial undertaking and a priority because of the situation they inherited and the timeline to complete it,” Haislmaier said, referring to the limited time the agency had before insurers began making decisions for the 2018 plan year.

In addition to the market stabilization rule, Price and Seema Verma, the new administrator of the Centers for Medicare and Medicaid Services, are reaching out directly to state governors.

Last month, Price and Verma sent a letter to governors reminding them of Section 1332 waivers, created under the Affordable Care Act. They urged the governors to pursue waivers to set up high-risk pools and state-run reinsurance programs.

High-risk pools and reinsurance programs are designed to lower costs for already-sick patients.

The two officials also sent governors a letter notifying them that the agency would consider state-led reforms to Medicaid, which include shifting benefit plan designs to include health savings accounts and requiring beneficiaries to pay insurance premiums.

“I think that’s been a good thing,” Chandler said of Price’s actions. “I don’t know if it’s enough, but it’s a step in the right direction.”