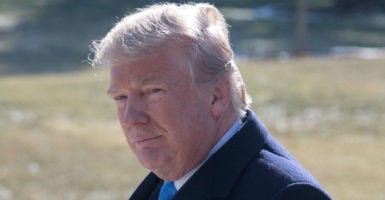 A watchdog group tried to sue President Donald Trump under the Constitution's emoluments clause, but was dismissed for lack of standing. (Photo: Ron Sachs - CNP/MEGA/Newscom)

A federal judge recently dismissed the first of three lawsuits against President Donald Trump that claim it’s unconstitutional for a president to own and profit from a business while in office.

Judge George Daniels of the Southern District of New York authored the opinion, filed Dec. 21, giving a win to Trump. But more generally, the opinion defends the principle that people cannot sue politicians in order to settle political debates in court, instead of in the legislature or at the ballot box.

Those provisions serve to keep certain federal officials from taking compensation from foreign state actors, Congress, or the states, in exchange for favorable official treatment.

The domestic emoluments clause (Art. II, § 1, cl. 7) explicitly refers to the president and his salary. But the foreign emoluments clause (Art. I, § 9, cl. 8) does not, and several legal scholars (particularly National University of Ireland Maynooth Law lecturer Seth Barrett Tillman) have persuasively argued that it does not even apply to the president, or reach fair market value transactions, such as an ambassador paying the going rate for a room at the Trump Hotel.

While the government conceded only “[f]or purposes of this motion” that the foreign emoluments clause binds the president, the court did not ultimately decide whether there was any merit to the plaintiffs’ novel and far-reaching legal theories.

Daniels, an appointee of President Bill Clinton, dismissed the lawsuit because the plaintiffs lacked standing—a constitutional requirement that a plaintiff demonstrate that whoever they are suing has caused them some actual, concrete injury that the court can remedy.

As many legal scholars and journalists have, Daniels rejected plaintiffs’ theory that they had standing to sue the president because their lawyers—ethics experts and law professors—have been “forced” (although their activities have been entirely voluntary) to spend time and resources investigating Trump’s business interests, rather than devoting time to other pursuits.

They sought a declaration by the court that Trump’s business profits are unconstitutional, along with an order for him to divest himself entirely from his business interests.

Had the lawsuit proceeded, the district court would have invited future lawsuits filed merely to recover the costs of litigation that was filed because of political disagreements.

As Daniels wrote, “Under [the plaintiffs’] unbounded definition of standing, for example, a news organization could sue the president by alleging that one or more of his statements forced it to divert resources away from a different story it might have pursued. Surely, something more is required.”

Perhaps recognizing the weakness of its own standing claim, Citizens for Responsibility and Ethics in Washington had teamed up with hospitality and restaurant workers in New York and Washington, D.C., who claimed that they could sue the president because it is unconstitutional for them to have to compete with his various restaurants and hotels, which allegedly were being patronized by people seeking to curry favor with Trump.

Daniels described that claim as “wholly speculative” and unlikely to be resolved by any court order. People may visit Trump’s hotels and restaurants for any number of reasons, the judge wrote, “including service, quality, location, price, and other factors related to individual preference.”

He continued, “[T]here is no remedy this court can fashion to level the playing field for plaintiffs as it relates to overall competition.”

But even if there were, Daniels wrote, it is for Congress, and not the court, to consent or not to the president’s business arrangements.

In Baker v. Carr (1962), the Supreme Court ruled that, although the plaintiff in that case had presented a justiciable issue, courts may be barred from hearing cases that present a political question.

The foreign emoluments clause provides that:

… no Person holding any Office of Profit or Trust under [the United States], shall, without the Consent of the Congress, accept of any present, Emolument, Office, or Title, of any kind whatever, from any King, Prince, or foreign State.

Daniels found that because the text gives Congress the power to consent to a federal official’s receipt of “any present” or “emolument” from any “foreign state,” the issue is “committed exclusively to Congress … .”

“If Congress determines that an infringement has occurred,” he continued, “it is up to Congress to decide whether to challenge or acquiesce to [Trump’s] conduct.”

The question now is, will Congress take up the emoluments issue?

It doesn’t have to. After all, by receiving profits from domestic and foreign business interests, Trump is merely following well-established precedent set by previous presidents, from George Washington and Thomas Jefferson selling farm goods abroad to Barack Obama and John F. Kennedy selling their books around the world.

Still, plaintiffs’ lawyers have said that they will appeal the December ruling.

And the two other emoluments lawsuits against Trump present slightly different facts in different courts, so a different outcome is, at least theoretically, possible, although unlikely.

Andy Grewal, a University of Iowa College of Law professor who has written extensively on the emoluments issues, has described the House and Senate Democrats’ lawsuit as “the absolute weakest,” stating that “disgruntled legislators cannot sue the president in this way.”

The attorneys general, however, raise several novel theories for why they should be able to sue the president, including an argument that, similar to the restaurant workers’ claim, it is unlawful for enterprises owned or funded by the state to have to compete with businesses that the president owns.

Even if a court decides that one or both of these parties has standing and agrees to hear the case, Daniels’ conclusion that Congress must act before a court can rule on the emoluments issues would apply.

Still, some in Congress have consistently attacked Trump’s extensive business interests since Sen. Elizabeth Warren, D-Mass., sought to make them grounds for impeachment after Trump’s election.

With nearly 200 Democratic members of Congress suing Trump and one unsuccessful attempt, initiated by Rep. Al Green, D-Texas, to impeach him, the issue is unlikely to go away anytime soon.

For now, Daniels has provided a well-reasoned opinion that should influence how the two other district courts view this effort to pull the courts and the Constitution into a political fight.