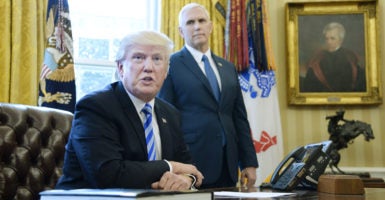 After House Speaker Paul Ryan decided to pull a bill partially repealing and replacing Obamacare, President Donald Trump reiterated his support for the conservative House Freedom Caucus and said it was a "hard vote" for them. (Photo: Douliery Olivier/Sipa USA/Newscom)

Following House Speaker Paul Ryan’s decision to withdraw a bill repealing and replacing Obamacare, President Donald Trump attempted to mend the factions of the Republican conference and reiterated his support for the House Freedom Caucus.

Republicans were supposed to vote on the plan partially repealing and replacing Obamacare on Friday. But Ryan notified members this afternoon he decided to pull the health care bill after a number of conservative and centrist Republicans rebelled against it.

During a press conference with reporters, Ryan indicated that it was the House Freedom Caucus, a group of roughly 40 conservatives, who prevented the legislation from passing.

Members of the group opposed the bill because they didn’t feel it would lower premiums. The conservative lawmakers wanted to repeal Obamacare’s insurance regulations, but GOP leaders would only commit to giving states authority over one of the regulations, the essential health benefits requirement.

While Ryan pointed to the bloc of conservatives as a reason why the conference failed to come to a consensus, Trump reiterated his support for the group.

“They’re friends of mine,” he told reporters in the Oval Office. “I’m disappointed because we could’ve had it. I’m a little surprised, I could tell you. We really had it. It was pretty much there within grasp, but I’ll tell you what’s going to come out of it is a better bill.”

Trump noted that the health care bill didn’t have support from any Democrats and said that “Obamacare is exploding.”

But the president said he hopes now Republicans and Democrats can come together and craft a bipartisan health care reform bill that passes both chambers of Congress.

“I honestly believe the Democrats will come to us and say, ‘Let’s get together and get a great health care bill or plan that’s really great for the people in this country,’” Trump said, “and I think that’s going to happen.”