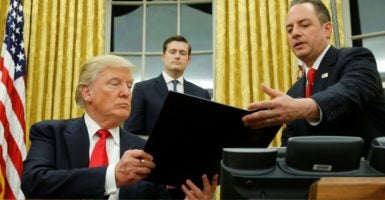 Hours after taking the oath of office, President Donald Trump followed up on his campaign pledge to start chipping away at Obamacare and curb federal regulations.

Trump signed an executive order Friday evening in the Oval Office “to ease the burden of Obamacare as we transition to repeal and replace,” White House press secretary Sean Spicer told reporters.

White House Chief of Staff Reince Priebus also sent a memo titled “Regulatory Freeze Pending Review” to block all pending regulations under review but not yet in the Federal Register.

The new president’s goal is to repeal the Affordable Care Act, better known as Obamacare, which will require congressional actions.

.@potus signs documents to allow Mattis and Kelly to be sworn in & exec order on #Obamacare pic.twitter.com/CdGcGlyfbI

“Potentially the biggest effect of this order could be widespread waivers from the individual mandate,” Larry Levitt, a senior vice president at the Kaiser Family Foundation, told The Washington Post.

Currently, individuals who do not have health insurance and do not qualify for an exemption must pay a $695 annual fee or up to 2.5 percent of annual household income.

“They’re very aware of the fact that the first job is to prevent the Affordable Care Act from doing more damage than it’s already done,” said Ed Haislmaier, senior research fellow in health care policy at The Heritage Foundation. “As we saw with the premium increases in the fall, people who are buying individual or small employer coverage without a subsidy are getting hammered.”

Haislmaier cautioned, however, that the executive order is “the beginning of the process.”

The order states that it is the goal of the Trump administration to repeal the law, but:

In the meantime, pending such repeal, it is imperative for the executive branch to ensure that the law is being efficiently implemented, take all actions consistent with law to minimize the unwarranted economic and regulatory burdens of the act, and prepare to afford the states more flexibility and control to create a more free and open health care market.

The order uses one phrase—“To the maximum extent permitted by law”—several times and continues:

[T]he heads of all other executive departments and agencies … with authorities and responsibilities under the act shall exercise all authority and discretion available to them to waive, defer, grant exemptions from, or delay the implementation of any provision or requirement of the act that would impose a fiscal burden on any state or a cost, fee, tax, penalty, or regulatory burden on individuals, families, health care providers, health insurers, patients, recipients of health care services, purchasers of health insurance, or makers of medical devices, products, or medications.

Democrats have argued that gutting the law that mandates individuals buy health insurance and employers provide it would leave millions uninsured. Republicans say the mandate has been overly burdensome.

Obamacare has seen an increase of about 14 million insured, based largely on Medicaid expansion.

However, the Obama administration admitted that health care premiums increased by an average of 25 percent across 39 states in October.

Further, 33 states have fewer insurers offering coverage on Obamacare in 2017 than in 2016. Only one state, Virginia, gained insurers. Five states have one insurer, while 13 have just two. One-third of all U.S. counties will have just one insurer.