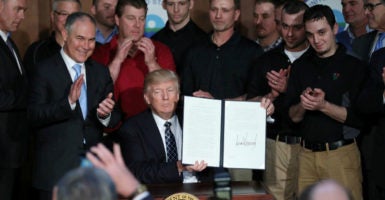 To the benefit of all Americans who desire affordable, dependable energy, the executive order will help energy companies establish some independence from overzealous regulators.

Here’s what the order does:

Orders the Environmental Protection Agency to review and repeal, or revise, the Clean Power Plan.

The Clean Power Plan is the backbone of President Barack Obama’s climate agenda, requiring states to transform their electricity mix away from conventional fuels toward renewables.

The plan will raise the costs of energy, and these will be borne by all Americans, especially low-income families who spend a larger portion of their budget on energy costs. And the climate benefits would be practically undetectable, mitigating a mere few hundredths of a degree Celsius warming by the year 2100.

Eliminates the use of the “social cost of carbon.”

As president, Obama created an interagency working group tasked with calculating the cost of carbon dioxide emissions to the U.S. economy as a whole.

This figure, called the “social cost of carbon,” is a dollar amount that federal agencies apply to different regulations to calculate the “climate benefit” of abated carbon dioxide emissions. In 2015, the social cost of carbon was said to be $36 per ton.

The problem is that the math behind these models is completely bogus. They are essentially a faux authority that the Obama administration set up to justify its heavy regulatory agenda.

The working group, led by the EPA, used three statistical models to estimate the value of the social cost of carbon, which is defined as the economic damage that one ton of carbon dioxide emitted today will cause over the next 300 years.

In terms of accurately assessing the social cost of carbon, the EPA may well have pulled a number out of a hat. The models produce widely disparate results when making reasonable changes to key inputs, such as changing the discount rate and climate sensitivity.

The results are so different that in some instances, the social cost turns negative, indicating there’s actually a social benefit of carbon dioxide emissions.

The bottom line: These models are baseless tools for regulatory analysis, and scrapping the use of “social cost of carbon” is a strong step along the Trump administration’s path of providing regulatory certainty and sanity.

Under Obama, the Department of Interior would not issue new coal mining leases on federal lands until the agency conducted a more comprehensive environmental review that included the estimated effects the lease would have on global warming.

Even though the overall climate impacts of these leases would be minimal, the regulation was symbolic of how the Obama administration approached coal: “Defeat by delay” and “Keep it in the ground.”

Rescinding this regulation keeps Trump’s campaign promise of giving coal communities a fighting chance. The methane regulations only added to the price of Obama’s costly climate policy without doing anything to mitigate global warming. Members of United Mine Workers of America hold a rally outside the Environmental Protection Agency headquarters in Washington, D.C., Oct. 7, 2014. (Photo: Jonathan Ernst/Reuters/Newscom)

The National Environmental Policy Act requires federal agencies to conduct comprehensive environmental assessments for a wide range of projects, including permitting of infrastructure.

The Council on Environmental Quality issued final guidance for how agencies should consider global warming impacts in their reviews, as negligible as they will be.

Rather than protecting the environment, the 50-year-old National Environmental Policy Act statute has evolved to serve more as a tool to delay and obstruct projects that are unpopular with judicially active special interest groups, or biased politicians who ignore scientific and technical logic.

For highway projects, the average time to complete an environmental impact statement increased from 2.2 years in the 1970s to 8.1 years in 2011. Currently, 148 energy and transit projects are undergoing review at an estimated cost of nearly $230 billion.

The National Environmental Policy Act needs wholesale reform or an outright repeal, and repealing the climate change guidance is a step in the right direction.

Unwinding Obama’s climate regulations is not just about saving money for industries. It’s about addressing the costs that will be incurred and meager benefits achieved by Obama-era regulations.

These regulations, even when combined with carbon dioxide cuts from rest of the developed world, do not buy much climate insurance. They are simply bad policy—both for the environment and the economy.