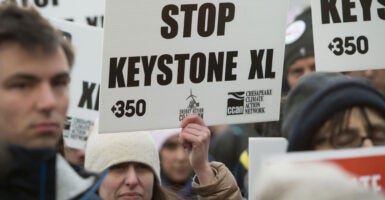 In his first week in office, President Joe Biden swept through a series of environmental policy actions. You’d be forgiven if most of it sounded vaguely familiar and you questioned whether we hadn’t settled all this before.

Among other actions, the new administration rescinded the cross-border permit for the Keystone XL pipeline, initiated reentry into the Paris Agreement on climate change, and signed an executive order reviewing or withdrawing environmental policies of the previous administration, such as national monument border adjustments, vehicle and power plant emission standards, and oil and gas leasing programs in Alaska.

In short, Biden’s actions are the latest tip of the seesaw between presidential administrations over environmental policy in the past several decades.

Take national monuments on federal lands by way of an example. In the waning days of his administration, former President Barack Obama unilaterally created an expansive national monument at Bears Ears in Utah, to the dismay of Utah’s state Legislature, the state’s congressional delegation, and locals who for generations have depended on access to the land for their livelihoods.

To the outcry of many environmental groups and luxury outdoor recreation retailers, former President Donald Trump made a point at the start of his administration to review Bears Ears and other national monument designations from the past two decades.

Some of the borders were unilaterally amended by Trump. Now, Biden is reviewing the review.

Competing administrations are interpreting their regulatory authority under the same environmental laws written by Congress to mean drastically different things.

The problem with this seesawing is it expends a lot of energy, but it doesn’t get you anywhere. The back and forth of executive branch “legislating” is costly, time-consuming, and distracting. It leads to all kinds of wasted time, energy, and resources, and feeds a vicious cycle of hard feelings and regulatory retribution.

Americans outside of Washington are the ones who take the beating. They are left to make decisions for their families and businesses, to plan for the future, and somehow find a confident course ahead amid uncertainty, knowing it could only be a matter of time before the seesaw tips the rules hard in the opposite direction.

While neither “side” seems to enjoy the exercise much, both refuse to stop because they have little incentive or external checks against doing so. However, Congress is forgetting that, constitutionally speaking, it’s not a powerless onlooker, but a critical part of the system.

If Congress wanted to, it could steady the game. Congress could pull back some of the responsibilities it delegated away to regulatory agencies, clarify the scope of laws, and create points of executive branch accountability.

As the Constitution designed it, and to the long-term benefit of the country, the office of the president and his agencies aren’t to be a king and royal court.

To show that this is possible, go back to the national monument issue. The Antiquities Act of 1906 affords the president power to single-handedly make decisions without consultation—to the mutual frustration of competing interest groups who otherwise agree on almost nothing.

Instead of perpetuating the executive seesaw, Congress could and should reengage to limit such unchecked executive power.

It could do this in a number of ways, such as requiring approval by the relevant state’s governor or congressional delegation. Wyoming and Alaska already enjoy similar protection under the Antiquities Act, to good effect.

Seesawing is no way to govern. It’s time for Congress to get involved for more durable environmental policy.