Federal Land Grabs Have Gotten Out of Control. Why Trump’s Executive Order Is a Positive Sign. 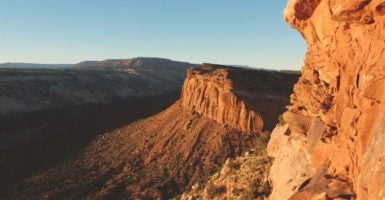 The Antiquities Act of 1906 allows presidents to designate national monuments without input from any local parties living near the landmark. (Photo: Staff/Reuters /Newscom)

Draining the swamp doesn’t just mean shrinking the size of federal bureaucracies. It means reducing the role of government throughout our society—including its ability to seize land.

A good place to start is President Donald Trump’s executive order, which calls for a review of national monument designations—a tool long used by presidents to unilaterally restrict land use.

That law was intended to prevent the looting of archaeological and Native American structures and objects, and it gave the federal government an expeditious path to do so.

Unsurprisingly, its use has evolved into a federal power tool for making land grabs that cater to special interests, rather than welcoming input from local affected parties, such as the outdoor tourist industry, Native American tribes, or simply the people living in the community.

Such land grabs date way back before President Barack Obama. Before his last-minute monument designations, 16 presidents designated more than 140 monuments covering over 285 million acres of land and marine areas.

Like every other environmental decision ordered by a new administration, the left responded to Trump’s executive order by predicting that it will reduce America the Beautiful to a dumpster fire.

As one publication put it, the order is a “sop to right-wing radicals who are hostile to public lands—and really hate Obama.” (They forgot to mention the hatred for puppies and rainbows, too).

Contrary to the media spin, the issue at hand is not about environmental stewardship, but taking decisions away from states, private citizens, and local interests.

For more than a century, the president of the United States has had the power to unilaterally designate land as a national monument, without input from Congress or the affected states.

Such action from the president either prohibits or restricts economic opportunity in the area, and often does more environmental harm than good.

Reading The Washington Post article on Trump’s order, one could easily assume that there is no local opposition to the controversial 1.35 million acre monument designation at Bears Ears declared by Obama in the final days of his presidency—one of the presumed targets of Trump’s executive order.

The Post gives the false impression that only elected Republican members of Congress opposed Obama’s designation.

The article highlights that a coalition of tribes, environmentalists, archaeologists, and outdoor industry groups all lobbied Obama for the protection at Bears Ears. Yet the author conveniently fails to include opposition from, you know, the local tribes and people that actually live in San Juan County.

For instance, members of the Navajo of San Juan County tribe—the county where Bears Ears resides—rescinded their support for the monument designation. Chester Johnson, of the Aneth Navajo chapter said,

At that time when they switched to national monument they didn’t share it back with the community what their intent was. Aneth is the only one chapter that had the backbone to stand up and say, ‘Look central government, you don’t do that. You share it with us what the intent is for our region, the land that we use for centuries.’

Another Aneth chapter member, Susie Philemon, fought back tears as she urged opposition to the designation, underscoring the fact that they have strong incentives, both economic and spiritual, to protect and preserve the land.

She stressed that “[t]here are people that still graze there, they reside there, and they make that place their livelihood and you cannot just take that away.”

Native American Rebecca Benally, the first woman elected to the San Juan County Commission, voiced opposition to the centralized decision, saying, “My constituents do not want a national monument in San Juan County because it’s just another federal overreach with empty promises.”

As loudly as the local community, the Navajo of San Juan County tribe, Utah Gov. Gary Herbert, and members of Congress and state officials voiced their concerns, they all fell on deaf ears.

The problem of unilateral land designation dates much further back than Obama and Bears Ears.

Although Obama designated the contentious Bears Ears monument in Utah as he walked out the White House door, the use of the Antiquities Act is a bipartisan problem. Presidents from both parties have abused the power to restrict land use.

A review of the use of the Antiquities Act designations is a welcome and necessary first step, but ultimately Congress needs to intervene.

Congress should recognize that states, local governments, and private citizens are the best arbiters of how to manage land and should repeal the Antiquities Act or limit the president’s power by requiring congressional, state, and local approval for any national monument designation.

Whether the issue is logging, recreation, conservation, or energy extraction, such decisions are most effectively made at the state and local levels. An antiquated law more than 110 years old shouldn’t ruin the lives of communities.