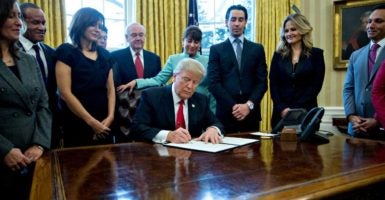 The order will expand regulatory review with the goal of dramatically peeling back federal regulations. The order is the Trump administration’s first step in repealing two regulations for every new regulation put forth, CNBC reports.

“This will be the biggest such act that our country has ever seen. There will be regulation, there will be control, but it will be normalized control,” Trump told reporters as he signed the executive order.

By signing the order, Trump is following through on his campaign promise to put a moratorium on any new regulations when he takes office. Trump also promised to end “all unnecessary regulations” imposed on the energy industry and to “dismantle” the 2,300-page Dodd-Frank Wall Street Reform and Consumer Protection Act.

The president called Monday’s measure the “largest ever cut by far in terms of regulation.”