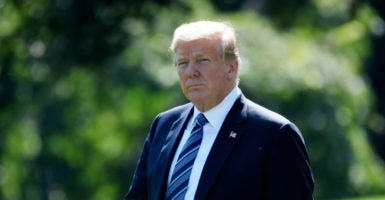 President Donald Trump’s new executive order allowing the sanctioning of foreign individuals attempting to influence American elections is a necessary step in the right direction, but more can be done.

The Heritage Foundation consistently recommends pushing back against nation-state actors who use cyber and other means to attack American interests. This new executive order is a welcome response to these recommendations.

The executive order—which establishes an interagency process for determining if foreign influence has occurred and for sanctioning those responsible—is inherently reactionary. But it does attempt to change the calculus of hostile foreign heads of state, such as Russian President Vladimir Putin, by incrementally constraining those “foreign persons” that other governments and entities use to conduct these cyber-attacks and illicit influence operations.

Those who dismiss this executive order because it is not a “silver bullet” risk misunderstanding the challenge and the nation’s needs, as well as the diffuse nature of our country’s unique, decentralized election administration system.

There is no single action the president can take to remove the threat of foreign influence. Instead, what is needed is a coherent suite of policies that proactively deters these attacks and punishes those responsible when they occur. Such a policy cocktail will involve initiatives across all elements of national power, and this order constitutes a significant advancement toward a solution.

So yes, more remains to be done. The U.S. is waking up to the threat posed to our country from foreign influence, and Congress also will need to grapple with the best way to counter this threat and ensure the First Amendment rights of American citizens to participate in the election and political process are not infringed. More must be done to deter and punish bad actors as well as better defend the U.S. election system.

It is state and local election officials who have the primary authority for protecting elections, from voter registration to the casting of ballots to the counting of votes, and that includes protecting against cyber-attacks.

To the extent there are systems and protocols that cybersecurity experts and federal agencies can provide to state governments, such support and expertise should be provided—without imposing unfunded mandates on state and local officials or discounting their concerns, expertise, and authority.

Much can be said regarding our slowness in responding to this growing threat, but the Sept. 12 announcement from the White House was a move in the right direction.