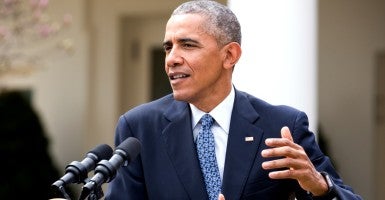 It might give some justices pause to know that vacating the Fifth Circuit opinion could open the door to a host of lawsuits against state governments. (Photo: Cheriss May/NurPhoto/Sipa USA/Newscom)

Next month, the Supreme Court of the United States will hear oral argument in United States v. Texas, which is the legal challenge by Texas and numerous other states to the Obama administration’s “Deferred Action for Parents of Americans and Lawful Permanent Residents” (DAPA) program.

That program sought to provide amnesty for 5 million illegal aliens with a stroke of the president’s pen—and it sought to insulate the unlawful action from challenge in court by claiming that the action was simply within the “prosecutorial discretion” of the president.

The program was blocked by Judge Andrew Hanen, a federal District Court judge in Texas, and his order was upheld on appeal before the United States Court of Appeals for the Fifth Circuit. It is that Fifth Circuit decision that is before the Supreme Court this term.

One of the key arguments of the government in that case is that DAPA is “presumptively unreviewable prosecutorial discretion because ‘lawful presence’ is not a status and is not something that the alien can legally enforce.”

The Obama administration asserts that DAPA can be revoked at any time and doesn’t allow illegal aliens to sue for benefits. Texas claims that DAPA hurts the state because, among other things, DAPA forces Texas to process driver’s licenses for the aliens. The federal government nevertheless responds that this cost is due only to Texas’ choice to provide these benefits.

The lawsuit claims that the DAPA memos have pre-emptive force—that is, that pursuant to the supremacy clause in Article VI of the Constitution, states cannot interfere with DAPA, which represents “federal immigration law” rather than the abdication or violation of federal immigration law. It also claims that denial of in-state tuition for illegal aliens given amnesty under DAPA violates their Equal Protection rights, because there is no “valid justification” to treat lawful permanent residents differently from illegal aliens in the DAPA program.

Set aside the absurdity of these claims. More important is the fact that the lawsuit itself is a strategic mistake, because it undermines the administration’s legal position justifying DAPA in the first place.

If it is true that the federal constitution mandates that illegal aliens receive certain benefits from the state simply because the president has chosen not to prosecute those individuals for a crime, then DAPA itself does change legal rights and responsibilities. And in that case, Texas and the many states suing to block DAPA have a stronger case before the Supreme Court next month.

In fact, it would not be surprising if this lawsuit were brought up at oral argument as a reason why Texas and the other states have standing to challenge DAPA, or as a reason why DAPA should have been subject to formal rulemaking procedures required by federal law.

While the actions of one activist group obviously do not bear on the validity of the litigation strategy of the Justice Department in defending DAPA before the Supreme Court, it might give some justices pause to know that vacating the Fifth Circuit opinion could open the door to a host of lawsuits against state governments that, quite reasonably, want to limit government-provided benefits to citizens or legal residents.

This piece has been updated to correctly identify the supremacy clause as being in Article VI of the Constitution.