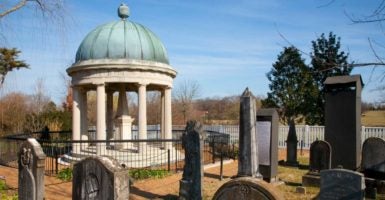 On Wednesday, Andrew Jackson’s 250th birthday, President Donald Trump is scheduled to lay a wreath on the seventh president’s grave. He will be the first president since Ronald Reagan to visit Jackson’s home in Nashville, Tennessee.

While a seemingly small gesture to a president who had been quickly fading in the minds of Americans, Trump’s visit is an important piece of symbolism for a man who ran under the slogan “Make America Great Again.”

Far too often in modern America, we are quick to point out the faults of our history, mock the “hypocrisy” of our forefathers, and abandon old heroes. Jackson has become a prime target of attack, a faded legend into whom we pour all of our nation’s early sins.

>>>Thomas Jefferson Now Politically Incorrect at the University He Founded

Though Jackson’s record has come under assault, it is a disservice to the country the Founders created and that we enjoy today to simply wipe from memory those who made it what it is. And Jackson, the quintessential man of the generation Alexis de Tocqueville described in his famed “Democracy in America,” was just such a man.

From Humble Roots to Self-Made President

The child of immigrants and a model of assimilation, Jackson was a relentless patriot and believer in the new civilization the Founders had created. Tough and seemingly at war with the world, Jackson was the leader America needed while it struggled to survive as a fragile republic in a sea of powerful regimes hostile to the idea of liberty.

When Old Hickory, as Jackson came to be nicknamed, led a rag-tag group of regular infantry, militia, pirates, and freed slaves to an almost miraculous victory against Britain’s finest at the Battle of New Orleans, he proved to the world and to the American people that this new nation could withstand any test.

Historian James Parton wrote that despite the imperious manner in which Jackson sometimes behaved, “most of the citizens of the United States will concur in the wish, that when the next European army lands upon American soil, there may be a Jackson to meet them at the landing place.”

It’s because of men like Jackson that modern Americans don’t have to worry about an invading army landing on our shores and that American territorial integrity is universally accepted as axiomatic.

When Jackson rose to the office of presidency, he proved that an outsider and self-made man could rise to the highest station in the country. Leadership and merit would be supreme in the new America, not birth.

Jackson’s election proved to Americans that We the People truly controlled the nation’s destiny, not an elite in a far-off powerful city.

According to Jackson, those who brought him to power were not a “class,” nor the “masses,” but simply the people; his people. A portrait of Andrew Jackson hangs in the Oval Office. (Photo: Kevin Lamarque/Reuters/Newscom)

As president, Jackson sought to restore the principles of the Founding as he saw them—America was in no need of radical transformations. He attacked the permanent, entrenched bureaucracy, took action against crony capitalism, and fought to ensure that the ideas of limited government and federalism would survive.

Jackson trusted that America would be strong if the people were strong, and the federal government limited to its proper place. And when the existence of the country itself was threatened, when so-called “nullifiers” threatened to disobey rightly-enacted federal laws and secede from the Union if they didn’t get their way, Jackson moved into action to defend the Constitution he swore to protect.

For Jackson, the Constitution and the declaration were at the heart of what he fought to preserve in this country. He wrote to a friend, “I have suffered too many privations in my youth for the establishment of that happy Constitution, and form of government, under which we live ever to violate its provisions, unless when dire necessity compels me; and then only to preserve my country, and the Constitution with it.”

This was the legacy Americans celebrated in Jackson’s time. This is the legacy Trump will honor by the simple, symbolic gesture of laying a wreath on Jackson’s grave for his birthday.

We will not abandon our past; we will not neglect who we are as a nation. We will recognize what it was and is to be an American, warts and all.

He was the man who had his way. He was the American whose simple virtues his countrymen most clearly understood, whose trespasses they most readily forgave; and until Americans are altogether changed, many, like the Democrats of the Twenties and Thirties, will still ‘vote for Jackson,’—for the poor boy who fought his way, step by step, to the highest station; for the soldier who always went to meet the enemy at the gate; for the president who never shirked a responsibility …

For those who wish to whitewash American history, destroying Jackson’s legacy will not be the last stop. The list of those who have sinned against modern and evolving politically correct standards will never end. First, we’ll lose Jackson, then Thomas Jefferson, then George Washington, and even Abraham Lincoln.

The president is taking a stand for Jackson with this small gesture, which simply draws the line. It shows the world and the American people that we are proud of who we are and what we mean to be again.