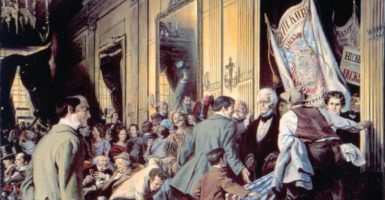 Andrew Jackson's inauguration became famous for the wild crowd it attracted. It set a precedent for how Americans welcomed their new leaders. (Photo: Picture History/Newscom)

The Washington establishment was stunned.

A political outsider with few connections in the nation’s capital, but wide national celebrity among the American people, was going to be the next president of the United States.

Washington, D.C., residents were unprepared for the wild scene that was about to unfold when the new president’s advocates—and a few detractors—poured into the city. Some compared this enormous mass of people to an invading barbarian horde pillaging Rome.

This scene may sound familiar in 2017, but it describes Andrew Jackson’s inaugural celebration in 1829. At the time, such large-scale fanfare at an inauguration was unprecedented.

Yet despite the circus atmosphere that Jackson’s inaugural became famous for, he delivered a powerful performance that set a course for his transformative agenda over the course of his administration.

More importantly, the event marked an occasion in which Americans from every station and status in life could feel a connection to the presidency. This has been an inaugural tradition ever since.

What became the wildest and most eventful presidential inauguration in American history began in tragedy for the election’s winner.

Four years earlier, Jackson had been defeated in the 1824 presidential election by John Quincy Adams, the son of president and Founding Father John Adams. No candidate pulled in a majority of Electoral College votes, so the election was bumped to the House of Representatives.

Adams took the House vote, but the election left a great deal of acrimony in its wake. Adams was accused of making a “corrupt bargain” with Speaker of the House Henry Clay, who was immediately nominated as Adams’ secretary of state following the election.

The 1828 rematch between Adams and Jackson became a hyperpartisan slug match. With the loosening of voting restrictions and the rapid move to make Electoral College votes based on popular elections in the states rather than on state legislatures, it was the most “democratic” presidential election in American history up until that time.

Jackson easily won the rematch against Adams, but at a terrible personal cost. Jackson’s beloved wife, Rachel, died just after his electoral triumph. Rachel had been an unfortunate target of the media and Jackson certainly believed this contributed to her death.

The famous hero of the Battle of New Orleans, winner of countless duels, and man who earned the nickname “Old Hickory” for sheer toughness, was laid low by the tragedy and couldn’t get into a celebratory mood for inauguration events.

Nevertheless, the heartbreak made Jackson even more determined to fight for the people who put him into office.

Jackson’s state of mourning didn’t stop his supporters from engaging in now-legendary revelry. They were exuberant in the sudden change of political fortune.

But for Jackson’s political opponents, the change of power was ominous and foreboding. Washington stalwarts watched as waves of people stormed into the city; they could hardly believe what they were seeing.

Though born and raised in South Carolina, Jackson lived most of his adult life in Tennessee.

At the time, Tennessee was a new state on the edge of the American frontier, and while Jackson wasn’t exactly a frontiersman, many of his Western friends and associates were rough-hewn individuals who had spent little or no time in the nation’s capital.

The citizens gathering in Washington were a bizarre collection of individuals from every walk of American life.

One historian wrote that this eclectic group of people was composed of “Tennessee backwoodsman and pioneers from the Northwest mingled with Irish immigrants from the seaboard cities, old soldiers, politicians of high and low degree, editors, adventurers, schemers.”

To the staid and proper circles of the Washington elite, the people who began to crowd the streets of their city were almost absurd to their eyes. And the issues that animated these curiosities from the heartland seemed entirely foreign.

And to Washington’s denizens, a sense of mystery and foreboding overshadowed what Jackson would do once he was situated in the White House.

General Jackson will be here abt. 15. of Feb—
Nobody knows what he will do.
Many letters are sent to him; he answers none of them …

When Jackson finally arrived in the city, he was wearing a black suit and a black armband to symbolize his mourning over his deceased wife. But many noted that his appearance was that of a dignified gentleman, not an uncouth barbarian.

Historian Robert Remini, who elaborated extensively on the events surrounding Jackson’s inauguration, wrote that Jackson “was the most presidential-looking figure to head the nation since George Washington.”

The city’s energy reached a peak on Inauguration Day.

“On the morning of the inauguration, the vicinity of the Capitol was like a great agitated sea,” historian James Parton wrote.

One spectator said, according to Parton, “To us, who had witnessed the quiet and orderly period of the Adams’ administration, it seemed as if half the nation had rushed at once into the capital.” The eye-witness said that every motion of the Jackson supporters in the capital appeared to cry out “victory!”

“I never saw such a crowd here before,” Webster said. “Persons have come over 500 miles to see General Jackson, and they really seem to think that the country is rescued from some dreadful danger!”

The crowd, which swelled into the thousands and tens of thousands to see the new president deliver his inaugural address, couldn’t be quieted enough to hear the soft-spoken Tennessean.

The speech was short, but resonated with the American people. Jackson borrowed heavily from the inaugural address of Thomas Jefferson, a man whose ideas he greatly hoped to emulate.

Jackson’s address laid out his general governing philosophy. He mentioned upholding the Constitution, defending the power of the states in relation to the federal government, and eliminating the national debt.

And perhaps, most importantly, Jackson maintained that he would undergo the “task of reform,” and go after the “unfaithful and incompetent hands” who had burrowed their way into power.

This specifically applied to career bureaucrats whom he distrusted and believed needed to be shaken up for the good of the country.

After completing his brief speech to uproarious applause, Jackson was given the oath of office by Chief Justice John Marshall. And after reciting the oath, Jackson kissed the Bible used in the ceremony and bowed to the people. This was when the event took a turn for the absurd.

‘Uninterrupted Stream of Mud and Filth’

A chain that was holding the crowd back suddenly snapped, and people began swarming the Capitol portico to congratulate their leader. Security attempted to contain the mob, but to no avail.

Jackson slipped through the crowd and stepped into an awaiting carriage. He made his way to the White House, where he was supposed to informally meet with supporters, but this event also got out of hand. A mad dash of well-wishers ambled into the building to see the new president.

One spectator mockingly remarked, according to Remini, that the people who filed in were an “uninterrupted stream of mud and filth … many subjects for the penitentiary.”

Revelers dropped food, toppled chairs and tables, fell into bowls of punch, shattered glasses, and spilled alcohol all over the presidential mansion. The floor became nearly a lake of wine and melted ice cream.

And there was such pushing, shoving, and tussling that the newly elected president was almost crushed under the weight of the commotion. Jackson somehow escaped the enveloping mass by ducking out of a side window.

Remini summed up how this inauguration, as wild and uncouth as it became, set a uniquely American precedent for the way we welcome our presidential leaders.

He wrote, “The inauguration proved so lusty in its display of the American spirit at its most boisterous, exuberant, and vulgar that the essential ingredients of this inaugural became traditional … The people—not politicians or Washington society … made it uniquely their own.”

In many ways, this inaugural tradition stands today.