7 Executive Actions on Abortion, Gender Identity We Can Expect From Biden

Will Biden Place Political Correctness Ahead of Military Readiness on Transgender Policy? 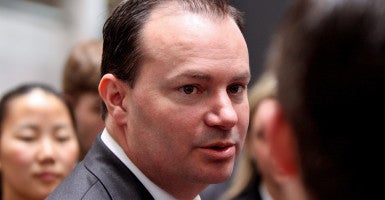 If you give a city a bailout, it’s bound to ask for another. That’s the philosophical foundation of Sen. Mike Lee’s opposition to federal aid for Flint, Mich., the city with contaminated drinking water.

“Washington politicians are using the crisis in Flint as an excuse to funnel taxpayer money to their own home states,” says Sen. Mike Lee.

Not only can Michigan handle its own problems, Lee told The Daily Signal, but federal intervention would do more harm than good.

“If we create a precedent that suggests any time there’s a significant problem with a locally operated utility that operates entirely intrastate,” Lee said, “I would ask, where’s the stopping point? What’s the limit?”

A one-man dam, the Utah Republican is holding back an emergency aid package worth $250 million. He argues that the money doesn’t target Flint specifically and it’s instead an opportunity for politicians to capitalize on the controversy.

There’s plenty of legitimate tumult in the Michigan city to exploit: More than 40 percent of Flint homes contained dangerous levels of lead in their drinking water.

But Lee points to an overflowing $386 million state rainy day fund and $575 million budget surplus as reasons for Michigan to deal with its own problem.

“What’s really happening here is that Washington politicians are using the crisis,” Lee wrote in a statement Friday, “as an excuse to funnel taxpayer money to their own home states.”

Lee adds a philosophical consideration to political and pragmatic concerns: Bail out Flint, and the government will start federalizing even more local concerns. He told The Daily Signal there’s “definitely a federalism-based argument” to be made against that option.

He fears the federalization of traditionally local responsibilities and the encroachment of national government on the individual states.

“Many if not most utility companies, at one point or another, are going to run into a problem,” Lee told The Daily Signal. “So what’s the logical stopping point?”

Lee’s remarks came Monday night after the conservative senator advocated his Article I Project at an event hosted by the Hoover Institution. There, he argued that Congress should reaffirm its constitutional authority and reclaim its “first among equals status.”

But while Lee wants Congress to reassert itself, he doesn’t want the legislature to begin meddling in local affairs.