Property Tax Deduction Is a Huge Boon to Wealthy Taxpayers, Not Average Americans 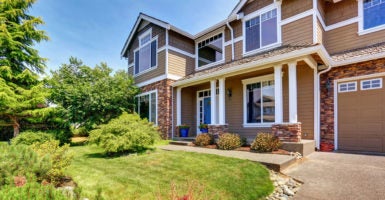 The property tax deduction is worth 22 times more to millionaires as it is to middle-income households. (Photo: iStock Photos)

Tax reform is supposed to be about lowering rates and getting rid of deductions and credits to help generate higher economic growth, and to let Americans keep more of their hard-earned money.

But now, lawmakers are doing the opposite. They are reportedly putting unfair and harmful deductions back into the package and raising marginal tax rates.

The federal tax code lets taxpayers deduct the taxes they pay to their state and local governments, including property taxes and income or sales taxes. This encourages high-tax states to maintain or increase their tax revenues while forcing taxpayers in low-tax states to foot the bill.

It also provides huge benefits to wealthy taxpayers, but little to no benefit for low- and middle-income taxpayers.

That’s not fair, and it doesn’t help the economy grow.

As lawmakers seem intent on putting the property tax deduction back into their proposed tax reform package, let’s take a look at who actually benefits from it.

The following is based on the most recent 2015 IRS data:

Higher-income earners are far more likely to claim the deduction than low- and middle-income earners, and they deduct significantly larger amounts. Households making between $75,000 and $100,000 deduct an average of $1,750 in property taxes from their federal tax bill, but the average millionaire deducts $24,500.

In other words, the property tax deduction is worth 22 times more to millionaires as it is to middle-income households.

So how will preserving this tax break for wealthy individuals and high-tax states help grow the economy and provide tax relief to middle-class families?

Instead of preserving this deduction, lawmakers should eliminate all state and local deductions. We estimate that doing so would reduce marginal tax rates by as much as 16 percent, and lower marginal rates would benefit all taxpayers.