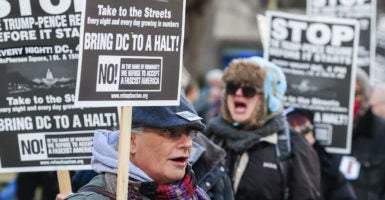 Protestors shout as they march in a circle in advance of President-elect Donald Trump's inauguration in Washington, D.C. (Photo: Tannen Maury/EPA /Newscom)

More than any other political act, the orderly transfer of power from one administration to another at a presidential inauguration demonstrates convincingly that we are a nation of laws and not of men.

Even with the closest of outcomes and the losing side’s understandable disappointment—and even anger—victor and vanquished normally pledge to work together for the common good.

Unfortunately, a coalition of left-wing radicals has now pledged to do all that it can to disrupt Donald Trump’s inauguration, including blocking streets and perhaps bridges, preventing people from assembling along the parade route, spreading false “news” about the ceremony’s participants and their remarks, and pledging a “permanent opposition” to the Trump presidency.

This radical left has ignored the example set by past presidential losers such as former Vice President Al Gore and former Secretary of State Hillary Clinton, who after suffering defeat demonstrated their respect for the Constitution and the rule of law.

Gore could have refused to accept the Supreme Court’s decision putting a stop to  ballot counting in Florida, but instead, he said that “for the sake of our unity as a people and the strength of our democracy, I offer my concession.”

Gore quoted Stephen Douglas’ comments to Abraham Lincoln, who had just defeated him for the presidency: “Partisan feeling must yield to patriotism. I’m with you, Mr. President, and God bless you.” With his concession remarks, Gore provided an example of high statesmanship rather than low partisanship.

A little more than two months ago, Trump lost the popular vote to Clinton by nearly 3 million votes out of 129 million cast, but won the electoral vote decisively by 306 to 232 votes.

Many Clinton supporters remain in deep denial, lending their support to the disaffected and the disgruntled who have promised to protest at the inauguration of Trump.

To her credit, Clinton has not encouraged the protests, but has rather stood by what she said at her concession speech on election night: “I congratulated Donald Trump and offered to work with him on behalf of our country. I hope that he will be a successful president for all Americans.”

Endeavoring to put politics behind her, Clinton said that “we owe [Trump] an open mind and a chance to lead” and acknowledged the importance of “the peaceful transfer of power.”

We do not know what Trump, ever unpredictable, will say in his speech after he has taken the oath of office to become our 45th president. But we have reason to believe that his inaugural address will be, at least in part, Reaganesque—optimistic and confident.

Speaking of Ronald Reagan, I think (as I wrote in National Affairs) that 2017 resembles 1981 in several significant ways.

Republicans have accumulated a vast backlog of conservative ideas over the past eight years that were blocked by President Barack Obama and are now available to Trump.

Similarly, The Heritage Foundation’s 1980 “Mandate for Leadership” contained a mountain of conservative policy reforms going back decades that helped Reagan move the federal government in a conservative direction.

Even so, Heritage has now offered the Trump administration a similarly comprehensive blueprint for conservative policies in every federal department and agency.

These include repeal of Obamacare and the creation of a free-market health care program; the repeal of Dodd-Frank and the shutting down of Fannie Mae and Freddie Mac; restoration of the work requirements for federal welfare; a flat tax rate on personal income; a commitment to traditional marriage; and the strengthening of our armed forces so that they are second to none.

The 2016 election returns have given conservatives a golden opportunity. The conservative agenda has proven solutions to many of the problems that led so many Americans—more than 61 million—to vote for the change that Trump promised.

It is now up to conservatives to convince policymakers from the White House to the statehouses to pursue the right path, to preserve life, liberty, and the pursuit of happiness for ourselves and those we love.