The Media Have It Wrong: Andrew Jackson’s Legacy Was Fighting Crony Capitalism 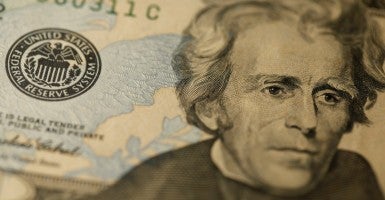 The Jacksonian creed was opportunity for all, favoritism to none. This is a message that should resonate today. (Photo: iStock Photos)

After a relentless campaign by conservatives, progressives, and Broadway musicals to keep Founding Father Alexander Hamilton on the $10 bill, it appears the Treasury Department will keep Hamilton. According to Politico, the agency will instead replace President Andrew Jackson on the $20 bill with Harriet Tubman. It’s a shame that progressives (and even conservatives) have been quick to ditch Jackson.

While it’s true that Jackson is often remembered for his alleged reputation for violence, the Trail of Tears, or perhaps even the 1959 Johnny Horton song, “Battle of New Orleans,” his true legacy is much more important to America.

Opportunity to All, Favoritism to None

The Jacksonian creed for instance was opportunity for all, favoritism to none. This is a message that should resonate today.

The Jacksonian creed for instance was opportunity for all, favoritism to none. This is a message that should resonate today.

His veto of the bank’s charter was one of the most eloquent attacks on crony capitalism in American history. Taking a stand against crony capitalism is of even greater importance today, as the failure of institutions like the Ex-Im Bank, mortgage giants Fannie Mae and Freddie Mac, and a host of other organizations that violate the principles of free-market capitalism to benefit a select few with influence in Washington, D.C.

Jackson also wanted to limit the power of the federal government to fund what he believed were local projects better left to the states. Jackson vetoed a number of infrastructure projects because, under his view of the Constitution, it was up to the states to fund them. He stopped the Maysville Road in Kentucky because he believed the “appropriations involve the sanction of a principle that concedes to the General Government an unlimited power over the subject of internal improvements.”

Jackson was a larger-than-life figure emblematic of a young United States: A country fighting for survival in a sea of hostile, powerful European regimes dead set on eradicating this unprecedented experiment of liberty. His life still has many lessons to inspire Americans, and he stood for much more than simple-minded populism.

Jackson wrote in his veto of the Second National Bank charter message to Congress:

It is to be regretted that the rich and powerful too often bend the acts of government to their selfish purposes. Distinctions in society will always exist under every just government. Equality of talents, of education, or of wealth cannot be produced by human institutions.

In the full enjoyment of the gifts of Heaven and the fruits of superior industry, economy, and virtue, every man is equally entitled to protection by law; but when the laws undertake to add to these natural and just advantages artificial distinctions, to grant titles, gratuities, and exclusive privileges, to make the rich richer and the potent more powerful, the humble members of society—the farmers, mechanics, and laborers—who have neither the time nor the means of securing like favors to themselves, have a right to complain of the injustice of their Government.

Though his record was occasionally blemished and his triumphs mostly forgotten—Jackson’s legacy deserves a place with other greats in the history of the republic, and his principles will likely have a growing, not waning impact on the future of the United States.

Unfortunately, all we hear today are Jackson’s faults. A recent Huffington Post op-ed claimed that it would be a tragedy to remove Hamilton from the $10 bill for the “pro-slavery, genocidal President Andrew Jackson.”

A Washington Post podcast focused almost entirely on Jackson’s “dark legacy” of violence and oppression, with very little about why the man was so beloved by Americans at the time. Federalist contributor, James Poulos, claimed that Jackson should be discarded because he represented nothing but “militant populism.”

Like many great presidents, Jackson was a polarizing figure who sparked both unhesitating admiration from supporters and loathing from opponents. Though he had many achievements and failures during his eight years in office, two aspects of his presidency stand out: the veto of the Second Bank of the United States’ charter and his principled stand against disunion during the nullification crisis.

Though Jackson has often been misidentified as economic leveler and a “populist” in the past, he was in fact a strong believer in the free-market as opposed to crony capitalism. In Jackson’s mind, the sordid connections between big business and big government would lead to tyranny.

His stand against crony capitalism and for limited government are worth emulating, and though he had widespread popular appeal, his worldview could not be boiled down to sheer populism without reason.

Though Jackson believed strongly in federalism and decentralized government, he still thought there was a role for the federal government under the Constitution that also couldn’t be violated by the states. He put his foot down when Southern radicals attempted to “nullify” tariffs legally passed by Congress. Jackson generally advocated for freer trade, but the law and the Union came first.

Many of the nullifiers hoped that Jackson’s strong inclination toward limited government would move him into their political camp, but Jackson would have none of it. At a celebration of Thomas Jefferson’s birthday filled with militant nullifiers, Jackson made a toast of seven words, which Ronald Reagan called among the most important any American has ever spoken: “Our Federal Union, it must be preserved.”

Jackson drew the line of what is acceptable under the Constitution, and negotiated for a reduction in the tariffs. He staved off one of the most threatening constitutional crises in American history and ended the threat of anarchy and secession, giving Abraham Lincoln and his supporters strong historical precedent for the perpetual union during the Civil War.

Historian William Garrott Brown summed up why Americans of the 19th century so strongly admired Jackson:

He was the man who had his way. He was the American whose simple virtues his countrymen most clearly understood, whose trespasses they most readily forgave; and until Americans are altogether changed, many, like the Democrats of the ‘Twenties and ‘Thirties, will still ‘vote for Jackson,’—for the poor boy who fought his way, step by step, to the highest station; for the soldier who always went to meet the enemy at the gate; for the president who never shirked a responsibility…

Jackson deserves greater recognition from modern Americans; old heroes should not be so quickly cast aside.