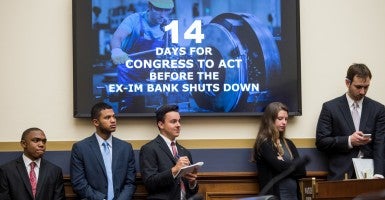 The Export-Import Bank does not help small businesses nearly as much as some suggest. (Photo: Bill Clark/CQ Roll Call/Newscom)

There’s always that one moment in a horror film when everyone thinks the villain has been killed, then bam—up he jumps, to the surprise of everyone.

That formulaic moment is often part of the fun on-screen. But if the same type of thing were to happen with the Export-Import Bank, it wouldn’t be very entertaining.

Yes, it did. Ex-Im, which provides taxpayer-backed loans, guarantees and insurance to foreign countries and companies to pay for U.S. products, expired on June 30.

That’s good news for taxpayers and all the U.S. firms that must compete without such subsidies. The expiration of this poster child for crony capitalism was long overdue.

But like an unstaked vampire, the bank may be only “mostly dead.” It could be revived, and soon, if its vociferous defenders have anything to say about it. Efforts to reauthorize the bank are underway on Capitol Hill—and finding a sympathetic ear among some lawmakers.

Fortunately, their claims are easily refuted. Take one of the most persistent ones, which concerns Ex-Im’s beneficiaries. As Republican Rep. Robert Dold of Illinois put it: “If we shut down the Export-Import Bank, who loses? Our small businesses.” The bank itself has asserted that 90 percent of its transactions supported small businesses in 2014.

That figure is highly misleading. An analysis by The Heritage Foundation found that small businesses benefit from less than 20 percent of Ex-Im’s actual financing.

And it’s worth noting that Ex-Im’s definition of “small” when it comes to businesses is rather generous, encompassing companies with up to 1,500 workers or even $21.5 million in annual revenue. Not exactly the “garage start-up” or mom-and-pop operation that phrase often brings to mind.

But it’s not surprising that Ex-Im’s defenders are trying to keep the public focus on small businesses, given the fact that most of its clientele consists of businesses that are clearly quite large, such as Boeing ($60 billion), General Electric ($6 billion), Bechtel Power Corp. ($4.6 billion), CBI Americas Inc. ($3.2 billion) and ExxonMobil ($3 billion).

“Boeing Capital posted customer-finance assets of $3.4 billion in the first quarter of 2015,” writes Ex-Im expert Diane Katz. “Indeed, both Standard & Poor’s and the Government Accountability Office effectively have concluded that Boeing, with a market cap exceeding $97 billion, would manage well without taxpayer subsidies.”

And if it can’t, you have to wonder what business it has being in business.

I’m sure some of Ex-Im’s clients have become dependent on this corporate welfare, and that it would take some time to wean themselves from it. But many other companies manage to be financially successful without tapping the taxpayer till. Why can’t they?

They need it to compete, we’re told. But as Ms. Katz notes, the number of small businesses that export (and the value of their exports) has grown significantly in recent years. Between 1997 and 2007, for example, the value of exports per small- and medium-size businesses increased by 80 percent, and the number of these exporting firms grew by 30 percent, according to the U.S. International Trade Commission.

If they can do it without Ex-Im, why can’t others? Or is it that they can, but they don’t want to?

Ex-Im’s backers may tell us it’s essential, but the bank supports only 2 percent of U.S. exports. This New Deal-era program has clearly outlived its original purpose. The question isn’t, “Should we revive it?” The question is, “Why did it take so long to bury it in the first place?”

Years of working on Capitol Hill have taught me that there are no permanent victories or defeats. All the more reason we should make sure the job is done right in this case—and keep Ex-Im from popping out of its coffin. A lot of wasted taxpayer dollars are at stake.