Rigged Election? A History of Presidential Candidates Who’ve Made Allegations 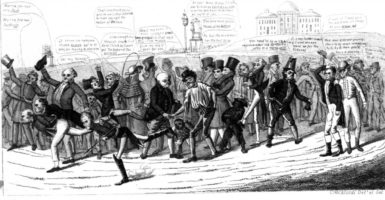 This cartoon from the 1824 presidential campaign depicts the presidential race as a foot race with Andrew Jackson, John Quincy Adams, and William Crawford running through a crowd. Henry Clay has dropped out. (Photo: Picture History/Newscom)

The current election is not the first time a candidate has charged that the game was rigged. The new book, “Tainted by Suspicion: The Secret Deals and Electoral Chaos of Disputed Presidential Elections,” delves into the common thread regarding the most controversial presidential elections in history.

The focus is on elections that dragged well beyond Election Day, decided by another branch of government. Here’s excerpts from three of the elections featured in the book.

Andrew Jackson believed the presidency was his. He clearly made the most impressive showing, carrying a majority of electoral votes in 11 states—Alabama, Illinois, Indiana, Louisiana, Maryland, Mississippi, New Jersey, North Carolina, Pennsylvania, South Carolina, and Tennessee. In an election defined by regional preference, Jackson was the only national candidate.

John Adams won the formerly Federalist strongholds of the six New England states, plus New York. William Crawford carried only Delaware, his home state of Georgia, and Virginia. It was enough to put him in third place.

On Dec. 1, 1824, the Electoral College announced the results. Jackson won the most Electoral College votes, winning 99 votes to the 84 votes for Adams. However, he didn’t have a majority, or 131, of the electoral votes that he needed. Despite coming in last place in the popular vote, Crawford would actually beat Henry Clay in the Electoral College, 41 voters to Clay’s 37 votes. …

After arriving in Washington on Dec. 7, 1824, Jackson wrote a letter to political supporter and former military ally John Coffee in Tennessee informing him of rumors that Adams and Clay had struck a deal, or would do so if they haven’t already. …

Before the vote, a Philadelphia newspaper, the Colombian Observer, published an anonymous letter on Jan. 28 claiming Clay would back Adams in return for being named secretary of state. Clay strongly denied this. In fact, there were two meetings between Adams and Clay, on Jan. 9 and Jan. 29, 1825. Nevertheless, there was not a lot of reason to believe Clay was divided. He and Adams saw eye to eye for the most part on infrastructure, on tariffs, and the National Bank. …

The House convened on Feb. 9, 1825, each state having a single vote that would be determined by a majority vote inside the delegation. Clay directed Kentucky, Missouri, and Ohio—the states he won—to the Adams camp. Most of Clay’s supporters, as well as the remaining Federalists, backed Adams in the House, enough to give him a single vote victory. The House delegations of three states that Jackson carried, Illinois, Louisiana, and Maryland, went to Adams. This gave Adams a majority of 13 out of 24 states.

Though not the first president elected after a drawn out process, Adams was the only president to assume office without a majority of the electoral votes. In a dour response, Adams said he regretted that there could not be a do-over for submitting the “decision of this momentous question” again “to obtain a nearer approach to unanimity.”

On Feb.14, Clay accepted the offer of the President-elect Adams to serve as his secretary of state—presumably making him the next heir apparent since the last four men to lead the State Department became president.

Jackson and his supporters immediately called this a “corrupt bargain” between Adams and Clay. The caucus system was supposed to be gone, but Jackson and his supporters claimed Clay essentially resurrected it to thwart the will of the people and install Adams. Jackson said referring to Clay: “The Judas of the West has closed the contract and will receive the thirty pieces of silver. His end will be the same.”

Democrats used violence, lynching, and riots to scare blacks away from voting, knowing it was possible for Republicans to carry some Southern states. Republicans were intent that two could play at this game, and in some cases actually sought to persuade blacks to vote by shotgun.

The day before the election, U.S. Marshal J.H. Pierce of the Northern District of Mississippi telegraphed Republican National Committee Chairman Zach Chandler, asserting that “the election in the northern half of the state will be a farce … Colored and white Republicans will not be allowed to vote in many counties. The Tilden clubs are armed with Winchester rifles and shotguns and declare that they will carry the election at all hazards. In several counties of my district leading white and colored Republicans are now refugees asking for protection.”

It was after midnight. The RNC’s Chandler—like Rutherford Hayes—had turned in for the night convinced of the party’s loss. But using Chandler’s signature from the RNC headquarters, Daniel Sickles telegraphed the Republican governors of South Carolina, Florida, and Louisiana to say, “With your state sure for Hayes, he is elected. Hold your state.”

“The country cannot afford to have the result tainted by suspicion of illegal or false returns.” —President Ulysses S. Grant said.

Three days after the election, Nov. 10, President Grant issued an order to General W.T. Sherman to instruct generals in Florida and Louisiana:

No man worthy of the office of President should be willing to hold it if it counted in or placed there by fraud. Either party can afford to be disappointed by the result, but the country cannot afford to have the result tainted by suspicion of illegal or false returns.

The first Tuesday of November in 2000 came the same day as the Election Day 1876—on the seventh. Half the country may have had better things to do than follow the Bore and Gush contest before election, but a decisive majority of Americans were glued after Election Day.

Bush would almost certainly have had significantly more votes had the networks not called Florida before polls closed in the heavily-Republican Panhandle, which is in the Central time zone. Gore campaign strategist Bob Beckel said that Bush lost at least 8,000 votes in the Panhandle alone because of the incorrect reporting.

Meanwhile, Republican polling firm McLaughlin and Associates estimated that Bush lost 11,500 votes because the networks reported the polls were closed in the Panhandle. Economist John Lott estimated between 7,500 and 10,000 voters in Republican counties were dissuaded from showing up. …

Democratic lawyers also began targeting the overseas absentee ballots from the military—which seemed to be more likely Republican voters. The attorneys threatened to sue Seminole County, where election officials corrected errors on thousands of applications for absentee ballots—many for military personnel. Democrats also targeted Duval County, which had one of the heaviest military populations in the United States. This prompted Republicans to say Democrats wanted to disenfranchise military voters.

Before this, Democrats had been able to control much of the message of demanding that every vote be counted. But when a memo surfaced from Democratic attorney Mark Herron that laid out a legal strategy for disqualifying military votes, Democrats found themselves on the defense. Despite a public relations problem, Democrats managed to disqualify 1,420 military ballots over various legal technicalities by Nov. 17.

Retired Army Gen. Norman Schwarzkopf, hero of the Gulf War and Bush supporter, issued a strong statement, asserting: “It’s a very sad day in our country when the men and women of our country are serving abroad and facing danger on a daily basis in places like Bosnia, Kosovo, or on ships like the USS George Washington, yet because of some technicality out of “their control, they are denied the right to vote for the president of the United States, who will be their commander-in-chief.”