Trump, Advisers Look to Specifics of Reopening Economy in Phases 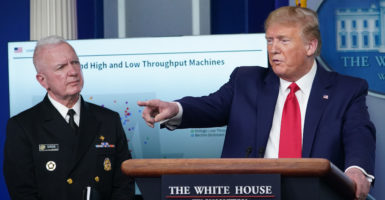 "Following the release of our reopening guidelines, governors across the country are looking forward to phase one and announcing plans for an economic resurgence," President Donald Trump says Monday evening, here with Assistant Secretary for Health Adm. Brett Giroir at his side during the White House's daily briefing on the COVID-19 pandemic. (Photo: Mandel Ngan/AFP/Getty Images)

The states of Georgia and Tennessee reportedly are taking steps to restart their economies after the coronavirus shutdown, and South Carolina has plans to do the same.

The White House guidelines issued last week, however, call for any state to enter the first phase of reopening only after 14 days of decline in the spread of COVID-19.

“But each of the governors can decide for themselves whether they have reached [the goals of] specific guidelines in specific areas,” Birx said.

The White House last week released a three-phase plan to reopen the U.S. economy on a state-by-state basis.

Following the release of our reopening guidelines, governors across the country are looking forward to phase one and announcing plans for an economic resurgence. At a time when millions of American workers and families are struggling with the financial consequences of the virus, it’s critical to continue the medical war while reopening the economy in a safe and responsible fashion.

The governor of the nation’s hardest-hit state and the president have had something of a love-hate relationship during the COVID-19 crisis that has played out through their daily press conferences. On some days they have taken jabs at one another, on others they have been mutually complimentary.

“Andrew is going to be coming in with some of his people, so we look forward to that,” Trump told reporters.

Trump said states are equipped to test for COVID-19 and held up and flipped through pages listing more than 5,000 testing locations. He noted that federal labs also are open for testing.

“That’s more than anybody thought. And it’s already there. They have to use it, that’s all,” Trump said of reports that testing remains unavailable in some areas.

Vice President Mike Pence, describing a conference call with all 50 governors held earlier Monday, said he got a positive reception and that the United States is succeeding in slowing the spread of the virus.

“We continue to see steady progress and less cases, lower hospitalizations even in hot spots around the country,” the vice president said. “We commended America’s governors for their efforts in that regard. … We’ve built a great number of hospitals around the country, but the utilization rate has been fairly low because of the mitigation efforts, the cooperation of the American people; we have not had to use them.”

Trump stressed that the pandemic and an initial problem accessing drugs—many of them made in China—highlighted the need for his “America first” agenda.

“This pandemic has reaffirmed the importance of keeping vital supply chains at home. We cannot outsource our independence. We cannot be reliant on foreign nations,” Trump said, adding:

I’ve been saying this for a long time. If we’ve learned one thing, it’s ‘Let’s do it here, let’s make it here.’ We’ve got the greatest country in the world. We’ve got to start bringing our supply chains back. … I like making it right here in the USA. I think we’ve learned a lot about that, especially when it comes to pharmaceutical products.