The Shocking Intolerance of Anti-Trump Liberals 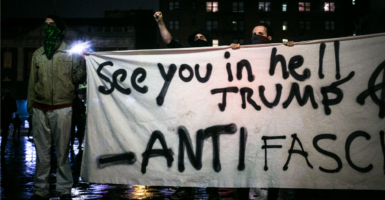 At least some liberals are considering literally ending ties with relatives over a vote for Trump. (Photo: Karla Ann Cote/Zuma Press/Newscom)

I have an unusual reading habit for a young, conservative woman: I regularly peruse the very liberal feminist site Jezebel.

Why? Well, I’ve always felt it was important to try to understand where liberals are coming from, think about if there are chances for common ground, and try to be thoughtful and considerate about their own concerns when I write. And on the Jezebel site, which is part of the larger Gawker (of course, the original site is now gone) family, there is generally a robust comment section.

I figured there would be a lot of emotions over Donald Trump’s win in the presidential election. But I wildly underestimated the extent of the anger—and the actions people would be taking.

Commenters are talking about ending relationships with Trump voters—and not just on Facebook.

Just take this comment from someone using the handle “bess marvin, girl detective,” responding to a piece about liberal comedian Samantha Bee noting that a lot of white women had voted for Trump, and addressing “so-called progressive white Jezzies”:

So many comments over over the past few months shows that a lot of y’all don’t want to be liberated, you want to be liked. ‘My (insert relative, loved one here) is voting for Trump but he/she is the nicest, kindest person ever…’ REALLY? How about this? Your loved one or relative is an awful human being. How kind and nice are they that they would push aside everything Trump has said and done to pull the lever?

Though we come from very different places, I’m not actually to blame for this. I understand and share your anger.

Look, I’m no stranger to disagreeing with relatives about politics. And that’s partly why I was so shocked to read this. Sure, some are truly upset now in light of this election’s result (welcome to how some of us felt in 2008 and 2012!), and maybe people will take different actions in the end.

But right now, at least some liberals are considering literally ending ties with relatives—including not letting grandparents see their grandkids!—over a vote for Trump. And that’s not just these two commenters. On a different Jezebel post, commenters discussed unfriending people on Facebook who supported Trump. “ImmortalAgnes” wrote:

I also deleted everyone who supported Trump from FB. Thankfully, it wasn’t that many people. Unfortunately, it included my step-dad. I don’t think these people don’t get it – I think they don’t care. I think that to take rights from women, from people of color, from the LGBT+ community, from non-Christians is what they want.

I love my step-dad. But I cannot stand by and pretend like he didn’t just proudly support racism and misogyny. I will not be speaking to him. I will not be seeing him. It’s a hard thing for me, but in this case my values and principals are more important and I will not invite someone at war with those to be part of my life.

Again: What? What are the rights that supposedly Trump is going to take away? We’ve been living in a country where, as The Weekly Standard’s Mark Hemingway tweeted, “Obama did sue nuns over birth control for crying out loud,” where religious bakers and florists have been told they have to participate in same-sex weddings, where an African-American fire chief lost his job over a book he wrote about his religious beliefs that included passages on same-sex marriage, and yet, the real threat to rights is from Trump?

Now there are hundreds of comments on Jezebel, and certainly not every one went in the direction of ending all contact with Trump fans. “InCaseYouDidn’tKnowTheyCallMeTheJackal” wrote, “Bent, but not broken. I am still a proud American. I am still a proud feminist. I will still welcome debate with those who oppose my views.”

And, of course, this kind of anger is not just happening online. There have been protests in cities across the country.

In Los Angeles, “Protesters … set on fire a piñata depicting the head of the president-elect,” reported CNN.

“Police in riot gear struggled to hold back scores of protesters in some of the cities as protesters chanted ‘Not My President’ and ‘No Racist USA,’” reported USA Today.

Liberals, I’ve spent the past eight years seeing the implementation of policy after policy I’ve despised, whether through law or executive action. I certainly get that it’s not easy. But I hope you’ll do what I’ve done, via reading Jezebel and other sites and talking to those on the left: Try to listen to what Americans at a different spot on the political spectrum are saying. Think about what they’re feeling. Try to understand, no matter how morally heinous you think a particular policy is, why someone, even if you think misguidedly, believes otherwise.

But it’s worth doing. Hillary Clinton was right about one thing: We are “stronger together.” This is an emotional week. But I hope in the long run, we can have a vigorous, but civil, debate between liberals and conservatives in the Trump era—not a refusal by liberals to even talk to Trump voters.