Trump Vows to Back Term Limits. So Do These 48 Lawmakers. 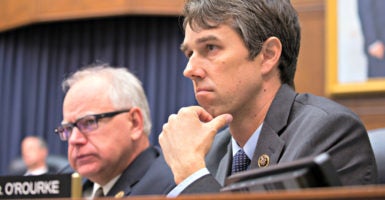 Rep. Beto O'Rourke, D-Texas, here during a House Armed Services Committee hearing in June 2015, is the only incumbent Democrat to have signed a pledge to back term limits for Congress. (Photo: Jeff Malet /Newscom)

Convincing lawmakers in Congress to limit their time in office has always been a tall order, but a presidential megaphone for the issue also has been rare.

A dozen senators and 36 House members so far have signed on to a pledge to support term limits according to U.S. Term Limits, an advocacy group.

Those lawmakers agree to co-sponsor and vote for a constitutional amendment to limit senators to two six-year terms and limit House members to three two-year terms.

Now, the support of President-elect Donald Trump could give the movement momentum.

Trump has said he would make term limits for members of Congress a top priority during his first 100 days in office. Amending the Constitution to implement term limits will take longer, but Trump said he would support the effort as part of his reform package on his first day, along with lobbying reforms.

“The time for congressional term limits has finally arrived,” Trump said at an October campaign rally in Colorado Springs. “Not only will it end our government corruption, but we will end the economic stagnation that we’re in right now.”

However, so far only one incumbent Democrat—Rep. Beto O’Rourke of Texas, co-chairman of the tiny Congressional Term Limits Caucus—has signed the pledge.

As the Republican majority has grown in Congress, it is quite likely more Democrats will be open to the wisdom of term limits, predicts Nick Tomboulides, executive director of U.S. Term Limits.

“There has never been a president as enthusiastic about congressional term limits,” Tomboulides said of Trump in an interview with The Daily Signal. The total of 12 senators and 36 House members who so far have signed the pledge falls well short of a supermajority. An amendment to the Constitution would need two-thirds of both houses of Congress to pass before being ratified by three-fourths of the states.

Tomboulides said he believes far more members of Congress would vote for term limits. So those who signed the pledge likely are a sampling of the support the measure would have if it comes to a vote, he said.

“Most Republicans in Congress and most members of Congress in general should understand that most of their constituents support this,” Tomboulides said. “It’s long overdue. Politicians have run out of excuses. All that experience and tenure has not resulted in more problems being solved.”

According to U.S. Term Limits, these senators and House members signed the term limits pledge (all but O’Rourke are Republicans):

The information graphic in this report was modified to correctly describe the term limits in the proposed constitutional amendment.