Remembering the Many Accomplishments of John Glenn 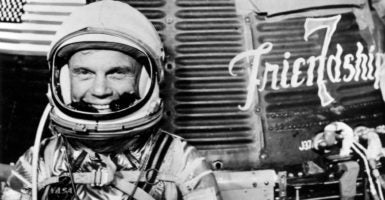 A 1962 photo of John Glenn with the Mercury ''Friendship 7'' spacecraft during preflight activities.(Photo: Atlas Archive/Nasa/ZUMA Press/Newscom)

In his 95 years, Glenn held three distinguished careers as a military aviator, an astronaut, and a four-term U.S. senator, accomplishing more in one lifetime than many could ever dream.

Glenn was born on July 18, 1921, in Cambridge, Ohio. When the Japanese attacked Pearl Harbor, he left college to enlist in the military.

Glenn began his storied career as a Marine Corps fighter pilot, serving in both World War II and the Korean War, and earning four Distinguished Flying Crosses, before becoming a test pilot for the Fighter Design Branch of the Navy Bureau of Aeronautics.

As a test pilot, Glenn chose one of the most dangerous occupations in the world. In 1957, Glenn set a new speed record, with “the first transcontinental flight to average supersonic speed,” according to Reuters—traveling from Los Angeles to New York in less than 3.5 hours.

In 1958, the newly founded agency NASA began recruiting for astronauts. Of the 508 pilots who applied to join NASA, only seven were accepted. As a gifted pilot with a propensity for breaking barriers, Glenn was a natural choice for the program.

Although he was disappointed not to have been the first American astronaut selected for a suborbital flight, he would still make history. On Feb. 20, 1962, he made his historic flight on Friendship 7, becoming the first American to orbit the earth.

He emerged from the capsule a national hero and a beacon of hope that challenged Soviet advances.

After retiring from NASA in 1964, Glenn turned his sites to the world of politics. In 1974, he won a seat in the Senate and carried all 88 of Ohio’s counties. Even in public office he continued finding new records to break.

In 1980, Glenn won re-election by 1.6 million votes, the largest margin in Ohio history. Then, in 1992, Glenn became the only person to ever serve Ohio in a U.S. Senate seat for four terms.

Upon his retirement in 1999, Glenn was the ranking member of the Committee on Governmental Affairs and served as a member of the Foreign Relations Committee and Armed Services Committee. As a senator, Glenn was best known as an advocate for nuclear nonproliferation, government efficiency, a strong foreign policy, and science and health research.

Before his retirement, Glenn would take one more trip to space. At the age of 77, as part of a research effort to investigate the effects of space on aging, he became the oldest human ever to conduct a space flight.

Glenn established the John Glenn College of Public Affairs at the Ohio State University in 1998. He was married to his childhood sweetheart, Anna Margaret Castor, for 73 years.

Glenn will forever be remembered as an American hero. He exemplified the selflessness, bravery, and moral fiber that Americans of all ages can respect.