Yes, Brexit Will Happen. And It Will Work. 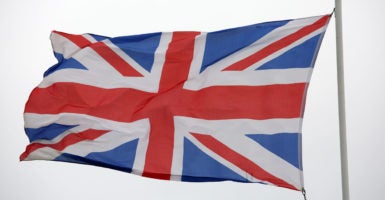 The opponents of Brexit still hope to keep Britain in part, or all, of the European Union's customs union and single market, which would—in effect—mean EU membership in all but name. (Photo: Caro/Sorge/Newscom)

The past week has seen big, and potentially confusing, events in Great Britain’s struggle to Brexit—to regain its national independence from the European Union. As we reach the second anniversary of the Brexit referendum, which took place on June 23, 2016, here’s what has happened.

The European Communities Act made EU law and judgments of the European Court of Justice binding in Britain and incorporated all existing EU law—including all EU regulations and directives—into British law.

In effect, at a stroke, the European Communities Act subordinated British law and democracy to the European Union.

For Britain to withdraw from the EU, it has to repeal the European Communities Act. Parliament has been struggling to do this for the past week.

The overwhelming majority of the governing Conservative Party supports repealing the law. But there were just enough Conservative rebels—six, in the end—to make life hard for the government. In addition, the nonelected House of Lords has a built-in anti-Brexit majority.

The basic issue at stake was whether the Commons would get a “meaningful vote” on what happens if Britain and the EU don’t strike a deal on Britain’s exit by next January.

This sounds innocuous, but it was intended to set up a vote the government might lose—which might force Britain to remain in the EU until the EU decided to strike a deal, which might be never. Just as bad, the EU would know this, so Britain would lose all its negotiating leverage.

In the end, the decisive vote came on Wednesday. Thanks partly to the support of four Labour rebels, the government won, 319-303. As a result, the European Union (Withdrawal) Bill has gone to the queen for her royal assent, which is a formality.

There is now no doubt: Britain will be exiting the European Union.

What is at stake next is the kind of Brexit that Britain will get. And there is still a lot to play for here. The opponents of Brexit still hope to keep Britain in part, or all, of the EU’s customs union and single market, which would—in effect—mean EU membership in all but name.

The EU’s attitude about this is simple. As European Parliament’s Brexit Coordinator Guy Verhofstadt said last week: “The rules are the rules, and you cannot change the rules.” In other words, if Britain is going to leave the EU, it will be treated as a third-party state.

The EU hopes that if it refuses to cut any deals at all, this will force Britain to remain in the EU in practice, if not in law.

What Verhofstadt says is untrue. The EU cheats on its rules all the time—whenever doing so is in its interests. Nor did the EU’s rules descend from heaven. The EU can change them whenever it wants. It just doesn’t want to do it now.

As a result, the timetable for a deal between Britain and the EU has slipped badly. Originally, the deal was supposed to be done by October. Now, the hope is it’ll be done by January. If the EU sticks to its all-or-nothing attitude, and the U.K. insists that “all” is unacceptable, the result will be “nothing.”

In other words, the U.K. and the EU are heading toward no deal. And that is just fine.

The U.S. ambassador to the U.K., Woody Johnson, recently asked why Britain was “so nervous” about leaving the EU, commenting that this need not present “a major challenge.”

Of course, leaving the EU will bring changes. That’s a good thing. The U.K. will continue to trade with Europe, regardless of whether it is in the EU, just as the United States does.

But the opportunities outside the EU are vast.

Outside the EU, the U.K. can negotiate its own free trade agreements with partners such as Australia, which is eager to do a deal. The U.K. can return to free trade in food, its traditional policy, which as a food-importing nation serves Britain well.

The U.K. can make sure that the City—its Wall Street—isn’t swamped by new EU regulations, and it can take an independent stand in regulatory bodies around the world, a stand shaped by its interests.

And, of course, it can negotiate a free trade agreement with the United States, a prospect the Trump administration has repeatedly welcomed, and which is now backed by the bipartisan UK Trade Caucus, led by Sens. Rob Portman, R-Ohio, and Chris Coons, D-Del.

Britain’s interests are not limited to Europe, much less the EU. They are global. Brexit gives Britain the opportunity to pursue them—and, above all, the freedom to govern itself.

We hear a lot in the mainstream media about how everything in Britain is bad and getting worse. Of course, Britain has problems. Who doesn’t?

But all those problems — including the ones the liberal press makes up—came about when Britain was in the EU. So it seems the EU isn’t the remedy. Perhaps it’s time to try something new.

And that’s the most inspiring thing about Brexit. Britain has had the courage to vote for change, to abide by the results of that vote, and to get out of the EU. You might call that new.