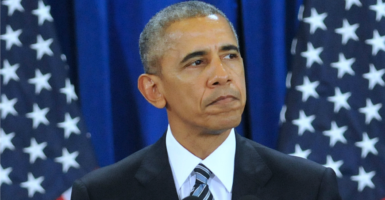 The U.S. has faced 66 Islamist terrorist plots against the U.S. homeland during President Barack Obama’s time in office, 13 of which were successful. (Photo: Paul Hennessy/Polaris/Newscom)

On Tuesday, President Barack Obama stated that “Over [the] last eight years, no foreign terrorist organization has successfully planned and executed an attack on our homeland.”

Talk about something actually deserving of being labeled as “fake news.”

Obama’s statement obscures the reality that the U.S. has faced 66 Islamist terrorist plots against the U.S. homeland during Obama’s time in office, 13 of which were successful.

When President George W. Bush left office, the U.S. had faced 28 Islamist plots after 9/11, only one of which was successful. Now there have been 93 Islamist plots since 9/11, and 14 successful attacks.

Obama’s statement is technically accurate since none of these attacks were planned and directed from abroad. Instead, the vast majority of the terror plots and all of the successful attacks since 9/11 have involved homegrown terrorists—that is, terrorists who radicalized and plotted here in the U.S.

While preventing such foreign orchestrated plots is vital, it is no longer enough. The threat has morphed and the U.S. must now do more to counter homegrown and lone wolf Islamist terrorists.

Obama’s comment obscures the truth that in his eight years in office, as shown by the sharp increase in the number of Islamist plots and successful attacks, the homeland has been less safe.

Claiming victory while the U.S. is in the most active period of terrorist activity since 9/11 is not only pushing a false narrative, but it risks diverting our attention from what needs to be done to defend the U.S. homeland.