Will Obama Be Held Accountable for Fast and Furious? What a New Court Decision Means 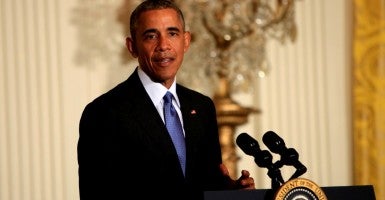 We may never see the internal documents that explain what was really going on when Operation Fast and Furious was conceived, planned, and implemented. (Photo: Polaris/Newscom)

In an odd coincidence, a federal district court on Tuesday issued a decision against President Barack Obama in the Operation Fast and Furious fiasco, at almost the same time that Fox News broke a story about Mexican authorities finding a Fast and Furious gun in the hideout of Joaquin “El Chapo” Guzman.

Guzman, who had escaped from a Mexican prison through an elaborate underground tunnel, is the notorious head of the Sinaloa drug cartel. Guzman was captured by Mexican law enforcement, who claim to have shadowed American actor Sean Penn leading up to an interview with Guzman (Penn’s interview in Rolling Stone is a story in itself).

The authorities seized a .50-caliber rifle in Guzman’s possession. When agents from the Bureau of Alcohol, Tobacco, Firearms, and Explosives (ATF) checked its serial number, they found that it was one of the rifles they had allowed straw buyers to purchase as part of Operation Fast and Furious, and then lost track of when the guns crossed the border into Mexico.

This is the type of rifle popular with long-range shooting competitors because of its power, range, and accuracy. Fox News was told by federal law enforcement sources that Guzman would station his men on “hilltops to be on guard for Mexican police helicopters that would fly through valleys conducting raids” so they could shoot down the helicopters.

The Tuesday decision by District of Columbia Federal District Court Judge Amy Berman Jackson, an Obama appointee, was in the lawsuit that the House Committee on Oversight and Government Reform filed in 2012 to enforce a subpoena the Committee served on former Attorney General Eric Holder in 2011.

On Feb. 4, 2011, after Congress started investigating the operation, the Department of Justice sent a letter to Sen. Chuck Grassley, R-Iowa, denying that any weapons had been allowed to leave the country and enter Mexico. Ten months later, the Department of Justice retracted that denial and confirmed that federal investigators had allowed straw purchasers to smuggle weapons into Mexico.

The subpoena sought documents from the Justice Department and ATF (which is part of the DOJ) about Operation Fast and Furious, including anything bearing on DOJ’s false claim in the Feb. 4 letter; why it took so long for Congress to be informed about the misrepresentation; and, according to Jackson, any records “reflecting the agency’s internal deliberations over how to respond to Congressional and media inquiries.”

Less than two week later, on June 28, the House of Representatives voted—for the first time in American history—to hold an attorney general in contempt.

After the U.S. attorney for the District of Columbia refused to enforce the contempt citation, the House filed its own civil suit against Holder, claiming that the assertion of executive privilege was invalid.

On Sept. 30, 2013, Jackson refused the Department of Justice’s request to dismiss the lawsuit entirely and stay out of a “political” dispute (DOJ’s characterization) between the legislature and the executive branch. She said that the administration’s “blanket assertion” of privilege over all documents generated after Feb. 4 “could not pass muster.”

She ordered the Department of Justice to provide a complete list of all the documents it was withholding, along with whatever privilege it was relying on to withhold each one from Congress.

Ruling on Release of Documents

On Jan. 19, 2016, after a long, continuing tug of war in the litigation between the House of Representatives and the Justice Department over these documents, Jackson finally issued a ruling on the privilege claims asserted by the administration.

The deliberative process privilege covers conversations with the president, as well other communications among high-ranking executive branch officials “crucial to fulfillment of the unique role and responsibilities of the executive branch.”

Jackson decided that this privilege does cover the Justice Department’s internal deliberations about how to respond to the press and Congress, but it is a qualified privilege, meaning that a court can order the production if the public interests at stake override the privilege. Here, the Justice Department was claiming that disclosure would harm the ability of its lawyers to have internal deliberations.

However, Jackson ruled against the Justice Department because the records had already been turned over to the Department of Justice inspector general. The inspector general issued a report on Fast and Furious, according to Jackson, that “laid bare the records of [DOJ’s] internal deliberations—and even published portions of interviews revealing its officials’ thoughts and impressions about those records.” Thus, “whatever incremental harm that could flow from providing the Committee with the records that have already been publicly disclosed is outweighed by the unchallenged need for the material.”

In fact, the Department of Justice can “point to no particular harm that could flow from compliance with this subpoena, for these records, that it did not already bring about itself.”

The Justice Department listed nine documents it was withholding without giving a reason; those documents were ordered by Jackson to be produced. The judge also ordered the production of the “segregable portions of any records withheld in full or in part on the ground they contain attorney-client privileged material, attorney work product, private information, law enforcement sensitive material, or foreign policy sensitive materials.” Whether any additional records have to be produced, she said, “is a matter to be resolved between the parties themselves.”

In an interesting comment on the current reputation of the Justice Department, counsel for the Committee told Jackson that they “did not have sufficient trust in the Department of Justice to take the Department’s word on [redactions].”

Jackson said, however, that she had no reason to disbelieve “assertions made in pleadings by an officer of the court representing another, equal branch of government” but that if a “neutral is required to read each individual redaction,” the “parties can arrange for that on their own.”

Jackson ordered the documents turned over by Feb. 2, but when asked whether the Justice Department would abide by the order at a hearing on gun control in a Senate committee on Jan. 20, Attorney General Loretta Lynch refused to tell Sen. Jim Lankford, R-Okla., whether they would comply or appeal the decision.

There is a lot of leeway in Jackson’s order that may still allow the Justice Department to claim it does not have to turn over documents under the other exemptions it has asserted, such as the “law enforcement sensitivity” claim.

So this case may not yet be over, and the House Committee (and the public) may never see the internal documents that explain what was really going on inside the ATF and the Justice Department when Operation Fast and Furious was conceived, planned, and implemented.