Was 2014 Really the Warmest Year On Record? Fact Checking Obama’s Climate Claims in State of the Union 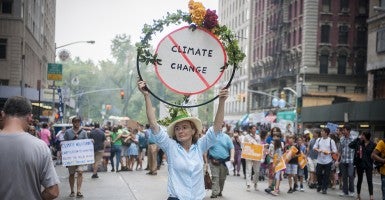 President Obama talked about climate change during his State of the Union speech Tuesday night. Was what he said accurate? We turn to Heritage experts to find out.

Obama said “2014 was the planet’s warmest year on record.  Now, one year doesn’t make a trend, but this does – 14 of the 15 warmest years on record have all fallen in the first 15 years of this century.”

Was 2014 really the warmest year on record? Heritage’s Katie Tubb weighs in:

Obama parroted back a headline from last week that’s dangerously lacking in context. What Obama and the NASA press release last week said was 2014 was the hottest year in recorded history. What was missing, to say the least: (Depending on what data you use) 2014 was the hottest year (by 0.02 degrees Celsius) in recorded history (since records were kept, starting 135 years ago). The reality is, the alleged record isn’t even outside of the margin of error NASA assumes, nor does it suggest we’re on our way to catastrophic global warming. The difference between actual data and what climate models project has only grown more disparate since temperatures have plateaued since the end of the 20th century. Yet governments around the world are building policies and regulations that directly impact people for the worse on the faulty conclusions of these faulty models. The EPA’s proposed regulations would have almost zero impact on global temperatures but will certainly impact Americans now and for future generations.

Satellite data shows that 2014 wasn’t the warmest year on record. NASA and National Oceanic and Atmospheric Administration did report that 2014 was the warmest on record but with low confidence. Berkley Earth, certainly not your climate deniers, said it was impossible to conclude whether 2014, 2010 or 2005 was the hottest year. Importantly, Berkley Earth’s bottom line is that “That is, of course, an indication that the Earth’s average temperature for the last decade has changed very little.

One year doesn’t make a trend, Obama says. And he calls attention to 14 of the warmest 15 years on record being in this century. Here’s what he fails to mention. There has been no increase in global surface temperatures over the past 15 plus years, even as global carbon dioxide emissions increased and climate models projected there would be increases in warming during this timeframe. Climate models continue to stray further from climate realities.

I’ve heard some folks try to dodge the evidence by saying they’re not scientists; that we don’t have enough information to act.  Well, I’m not a scientist, either.  But you know what – I know a lot of really good scientists at NASA, and NOAA, and at our major universities.  The best scientists in the world are all telling us that our activities are changing the climate, and if we do not act forcefully, we’ll continue to see rising oceans, longer, hotter heat waves, dangerous droughts and floods, and massive disruptions that can trigger greater migration, conflict, and hunger around the globe.

That’s why, over the past six years, we’ve done more than ever before to combat climate change, from the way we produce energy, to the way we use it.  That’s why we’ve set aside more public lands and waters than any administration in history.  And that’s why I will not let this Congress endanger the health of our children by turning back the clock on our efforts.

There are plenty of greater threats to future generations than climate change. How about getting energy access to the billions of people without affordable and reliable electricity?

Obama says he refuses to allow Congress to turn back the clocks on the administration’s climate regulations. But it’s the president who’s turning the clocks back on economic growth and job creation with regulations on energy that will drive prices higher for no meaningful climate benefit. Using a climate calculator and model developed by the Environmental Protection Agency, climatologists Paul Knappenberger and Pat Michaels project that the EPA’s climate regulations will mitigate 0.02 of a degree Celsius warming by the end of the century. These are not regulations that are helping future generations but instead giving them a less prosperous world to look forward to.

Obama also touted the climate agreement made with China, saying:

In Beijing, we made an historic announcement – the United States will double the pace at which we cut carbon pollution, and China committed, for the first time, to limiting their emissions.  And because the world’s two largest economies came together, other nations are now stepping up, and offering hope that, this year, the world will finally reach an agreement to protect the one planet we’ve got.

But Loris questions that deal:

Obama calls his climate deal with China “an historic agreement.” In his commitment to reduce carbon emissions 26 percent to 28 percent below 2005 levels, the president is committing Americans to higher energy prices, a weaker economy and a lost competitive advantage. China, a rapidly growing country that has shown no intent on tackling its real environmental challenges, gets to make a promise to cut emissions beginning 15 years from now. Pure and simple, it’s a raw deal for America.

(Tubb and Loris’ comments were first published in “What Obama Got Right and Wrong in the State of the Union.”)