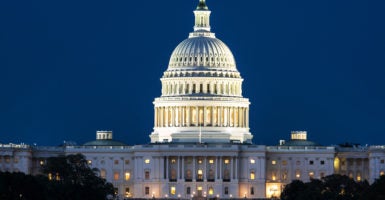 Insurance companies and industry groups are lobbying Congress over two Obamacare programs set to expire at the end of the year, the risk corridor and reinsurance programs. (Photo: John Greim John Greim Photography/Newscom)

Insurance companies continue to put pressure on members of Congress over two Obamacare programs set to expire at the end of the year.

Lawmakers and outside groups expect a fight over the risk corridor and reinsurance programs—referred to as insurer “bailouts” by conservatives—during the lame-duck session, the period after the Nov. 8 election and before the start of the next Congress.

Members of the House and the Senate have spent the past few weeks back in their districts ahead of the election. But insurance companies and trade groups representing insurers have not stopped pressing Congress on the two programs, according to the latest lobbying disclosures filed with both chambers.

From July 1 to Sept. 30, insurers and associated groups spent nearly $10.5 million on lobbying efforts for the risk corridor and reinsurance programs, among other issues related to health care.

So far this year, the organization has spent $5.6 million on lobbying, according to the Center for Responsive Politics. Not all of that money was related to efforts involving the Obamacare provisions.

The trade group hasn’t shied away from publicly advocating for tweaks to the risk corridor and reinsurance programs.

In an interview with Morning Consult last month, Marilyn Tavenner, America’s Health Insurance Plans CEO and  former head of the Centers for Medicare and Medicaid Services, which oversees Obamacare, said changes need to be made to the two programs.

“I know ‘risk corridors’ is a bad word. ‘Reinsurance’ is a bad word. But the fact of the matter is, it’s probably taking longer than three years to stabilize,” Tavenner said. “So I think Congress, after the election, is going to have to take a look at this and decide, ‘How do you stabilize this market?’”

Only the Blue Cross and Blue Shield Association, a trade group representing 36 plans nationwide, outspent America’s Health Insurance Plans on lobbying efforts for the risk corridor and reinsurance programs from July 1 to Sept. 30.

The organization spent $4.6 million on efforts involving the two Obamacare provisions, according to lobbying disclosures.

So far this year, the Blue Cross and Blue Shield Association spent $19 million on lobbying, though not all of it was devoted to the risk corridor and reinsurance programs, according to the Center for Responsive Politics.

Though not all of the money went toward lobbying for the risk corridor and reinsurance programs, insurance companies have been pressing Congress to make changes to them over the past few months.

In filings with state regulators, insurers attributed rising premiums, in part, to the end of the reinsurance program.

The risk corridor and reinsurance programs, written into the Affordable Care Act, are set to expire at the end of the year.

The two programs, along with a third, the permanent risk adjustment program, were designed to help mitigate insurers’ risks in enrolling populations that potentially were sicker and costlier than in previous years.

In 2014 and 2015, Republican lawmakers included language in government spending bills requiring the Department of Health and Human Services to use only money it received from insurance companies with lower-than-expected costs through the risk corridor program to pay out insurers with higher-than-expected costs.

As a result, insurance companies received 12.6 percent of the money they requested from the risk corridor program.

Now, several insurance companies including Moda Health and Blue Cross and Blue Shield of North Carolina are suing the Obama administration for the rest of the money.

Republicans in Congress worry that, in order to settle with insurers, the Justice Department will tap into the Judgment Fund, an indefinite appropriation created by Congress and administered by the Treasury Department.

Doing so would provide the White House with a way to pay the full risk corridor payments to insurers, effectively circumventing Congress, they warn.

But in motions to dismiss filed by the Justice Department in response to the lawsuits, the government argued insurers weren’t entitled to the full payments under the risk corridor program.

According to lobbying disclosures, insurance companies want Congress to appropriate more money for the program and combat Republican-led efforts to limit the money available through it.

As with the risk corridor program, insurance companies and related organizations have pushed lawmakers to extend the lifespan of the reinsurance program.

Under the reinsurance program, the Obama administration diverted $5 billion intended for the Treasury to insurers. A legal decision from the Government Accountability Office issued in September found that the Department of Health and Human Services acted illegally in prioritizing giving this money to insurers over the Treasury.

Sen. Ben Sasse, R-Neb., and Rep. Mark Walker, R-N.C., introduced legislation earlier this year requiring the Obama administration to repay the $5 billion owed to the Treasury, or face steep cuts to the Health and Human Services management fund this year and next year. Both House and Senate versions of this legislation have been referred to their respective committees.

It is called the Taxpayers Before Insurers Act, and insurers and groups such as America’s Health Insurance Plans are lobbying members to oppose it.

Conservative groups have issued warnings that health insurance industry giants would look to the lame-duck session as the time to push for changes to the program.

And they, too, lobbied members to oppose any changes.

According to lobbying disclosures, Heritage Action for America, the sister organization of The Heritage Foundation, spent $110,000 from July 1 to Sept. 30 lobbying, in part, for Sasse and Walker’s bill.