Obama Administration Is Willing to Break the Law to Save Obamacare 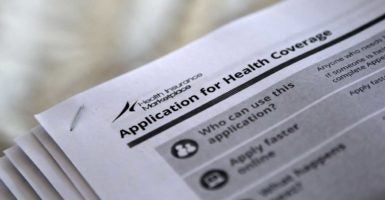 President Barack Obama’s signature health care law is failing and his administration will go to seemingly any length to prop it up.

You know the famous quote from “Animal Farm” that “all animals are equal, but some animals are more equal than others?” This was George Orwell’s attempt to point out the hypocrisy that many politicians preach equality, but then give favors to only a few.

Well, for the Obama administration, it turns out that the health insurance companies participating in Obamacare happen to be “more equal” than taxpayers—even to the point where the administration is willing to break the law to help them stay in Obamacare.

To see what I mean, consider the Transitional Reinsurance Program. Section 1341 of the Patient Protection and Affordable Care Act, or Obamacare, authorizes the secretary of Health and Human Services to collect payments from health insurance companies and group health plans to stabilize health insurance markets during the transition to Obamacare’s exchange-based coverage.

The transitional period is set, by law, to cover the plan years 2014 through 2016. However, section 1341 also requires HHS to collect payments from those companies to cover specified amounts and to deposit that money in the general fund of the United States Department of the Treasury.

The requirement to deposit a portion of the collections essentially earmarks that money for deficit reduction. The statute explicitly says that the collections for Treasury cannot be expended on the program. In other words, it cannot go back to the insurers unless Congress provides another appropriation redirecting those funds.

However, HHS has decided to ignore this requirement altogether by allocating all of the collections toward covering the losses of insurance companies. The administration’s decision to redirect all of the collections to the insurers and none to Treasury came only after Obamacare was up and running and the administration found out that it wasn’t collecting as much as expected from the unprofitable insurers.

Not only is favoring a select few over the taxpayers unethical, but according to a recent legal opinion issued by the Government Accountability Office, it’s also illegal. The GAO’s legal opinion is important given its statutory authority to issue legal decisions on the availability of appropriated funds by federal agencies under the Budget and Appropriations Act of 1921 (P.L. 67-13).

According to the GAO:

The fact that HHS’s collections ultimately fell short of the projected amounts does not alter the meaning of the statue. Addressing similar circumstances, courts have held that an agency has an obligation to ‘effectuate the original statutory scheme as much as possible.’ … In such cases, courts have held that a pro rata distribution of funds would most closely adhere to Congress’s original allocation … We do not see any flexibility under section 1341(b)(4) to all HHS to expend the pro rata share of collections attributable to the Treasury … Instead, these collections must be deposited in the Treasury.

Furthermore, that GAO concluded that HHS’ selective reading of the law is “driven solely by the factual circumstances present here, namely, lower than expected collections.” But this unfortunate outcome is not reason to ignore statutory requirements:

… HHS’s position selectively ignores one of the statute’s purposes—which is collecting funds for the Treasury—giving effect to only one of the statute’s purposes—stabilization of health insurance premiums … We agree that a purpose of section 1314 is to provide premium stabilization in the initial years of PPACA’s health insurance reforms. However, this is not the sole purpose of section 1341. Congress clearly intended that the program established under section 1341 would generate collections for the Treasury.

This goes to show that this administration is willing to do just about anything, even breaking the law, to prop up the failing Obamacare.