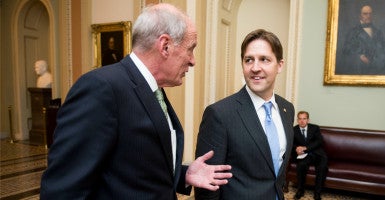 Sen. Ben Sasse, R-Neb., introduced a bill requiring the Department of Health and Human Services to repay $5 billion to the U.S. Treasury or face cuts to its general departmental management fund. Under Obamacare's transitional reinsurance program, the Obama administration is required to repay $5 billion to the Treasury from 2014 to 2016. However, it decided to prioritize $3.5 billion in reinsurance payments to insurance companies. (Photo: Bill Clark/CQ Roll Call/Newscom)

Sen. Ben Sasse, R-Neb., introduced a bill Thursday that would force the Obama administration to deposit $5 billion in the Treasury by 2017 as required under Obamacare’s reinsurance program or face steep cuts to its departmental management fund this year and next year.

Called the “Taxpayers Before Insurers Act,” Sasse’s legislation codifies penalties for the Department of Health and Human Services should it choose to again divert billions of dollars in reinsurance payments intended for the U.S. Treasury to insurers.

Republican lawmakers have criticized the Obama administration for using the transitional reinsurance program to bail out insurance companies after it prioritized $3.5 billion in reinsurance payments to insurers instead of the taxpayers.

“HHS must stop cheating taxpayers,” Sasse said in a statement. “The reinsurance program is a clear case of Washington’s cronyism: families are suffering Obamacare’s consequences but Washington bureaucrats are sending billions of dollars to well-connected insurance companies.”

Lawmakers probed the Obama administration over its decision to disburse $3.5 billion intended for the Treasury to insurers in February. Since then, committees in the House and Senate have further scrutinized the Department of Health and Human Services for its actions.

Sasse sent a letter to the agency, led by Secretary Sylvia Mathews Burwell, on Feb. 29, urging it to deposit the money back in the Treasury.

“By executive fiat you have denied the Treasury $3.5 billion … that is owed,” he wrote. “Your prioritization of funds is increasing the deficit and forcing future generations to pay for irresponsible spending under the [Affordable Care Act’s] new entitlement programs.”

The Department of Health and Human Services responded to Sasse’s letter yesterday and reaffirmed that it not only had the statutory authority to prioritize the payments to insurers over the Treasury, but that it explicitly outlined its plans to do so.

The agency stressed that the Centers for Medicare and Medicaid Services (CMS) planned to allocate money it collected through the reinsurance program to insurers first and then pay administrative expenses.

“Once those targets were met, the remaining contributions collected for that benefit would be allocated to the U.S. Treasury,” the Obama administration said.

Obamacare’s reinsurance program, in place from 2014 to 2016, was designed to mitigate the risks insurance companies incurred by providing coverage to consumers who were uninsured before the health care law’s implementation.

Over the reinsurance program’s lifespan, the agency is required to pay $5 billion total to the Treasury.

The law instructs the Department of Health and Human Services to distribute the remaining money to insurance companies and to cover administrative costs.

CMS collected less money than the agency anticipated in 2014, and instead of remitting the $2 billion to the Treasury, the Obama administration distributed the money to insurers.

Then in 2015, the agency again said it would prioritize payments to insurers over the Treasury, and CMS diverted $1.5 billion to insurers once again.

Lawmakers, including Sasse, have since alleged that the Obama administration broke the law by paying insurance companies first, instead of the Treasury.

In February, the Congressional Research Service issued a memo in response to inquiries from two House committees regarding the transitional reinsurance program.

The nonpartisan agency concluded that the Centers for Medicare and Medicaid Services’ interpretation of the law appeared to be “in conflict with a plain reading of [the Affordable Care Act],” and said the agency should have been able to pay a share to the Treasury.