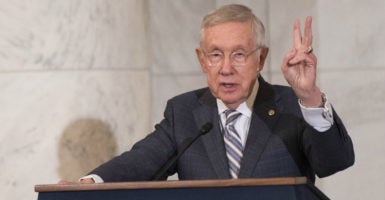 Democrats have lied about Obamacare from the beginning, but outgoing Senate Minority Leader Harry Reid, D-Nev., apparently intends to tell the biggest lie of all as he exits the Washington scene.

In an interview about whether Republicans in Congress would make good on their promise to repeal and replace the Affordable Care Act, Reid said, “You get rid of Obamacare, people are going to die.”

President Barack Obama’s promise that if we liked our doctor we could keep our doctor turned out not to be true, and so did his pledge that health care premium costs would go down. As millions of Americans eventually found out, they went up.

But a politician failing to keep his promises, as egregious as those two were, pales in comparison to Reid’s outrageous and baseless comments that “people are going to die” if the failing law is repealed and replaced.

Perhaps what Reid should consider are the real-life stories of people who have lost their lives because of Obamacare.

People like Frank Alfisi, who was refused dialysis in the emergency room because of a new Medicare regulation put in place via Obamacare. Or Julie, a mother of four, who delayed seeking medical attention waiting for her new government-approved insurance to kick in because her family’s private health care had been canceled. Or Linda, a Nevada woman who was delayed in getting treatment for a brain tumor because of enrollment snafus in her state’s Obamacare exchange.

Though Reid offered no proof for his comments, he seemed to suggest that repealing the unaffordable Affordable Care Act would cause the health care insurance marketplace to collapse—and that this was the GOP’s plan, stating, “Can you think of … something more cold and calculated than that.”

Yet, it is because of Obamacare that next year, 33 states will have fewer insurers offering individual coverage on the exchanges than they did this year.

The country’s largest health care provider, UnitedHealthcare, announced last April that it was pulling out of the majority of the exchanges due to high costs. Humana also says it is cutting back, and Blue Cross Blue Shield has already moved to reduce its offerings in several states.

If Reid is so concerned about the collapse of the health care marketplace, perhaps he and his pal House Minority Leader Nancy Pelosi, D-Calif., should have read the Obamacare bill before they, without one Republican vote, passed it.

And let’s be clear about one other matter.

The majority of new health care enrollments via Obamacare came by putting people on Medicaid. And as studies show, not only do patients with Medicaid receive poorer care than those who have private insurance, but because of low reimbursement rates, more and more doctors are refusing to accept Medicaid patients, meaning individuals on Medicaid are having a harder time finding primary care doctors and specialists to treat them.

So just because someone has been given a Medicaid card with their name on it doesn’t mean they are able to get the health care they need. All Obamacare has done is added millions more people to a program that was already failing the people it is supposed to serve.

Democrats’ refusal to see the truth about Obamacare and how it is hurting the American people is one of the main reasons Republicans won the presidency and retained control of both the House and Senate.

Somebody needs to tell Harry.