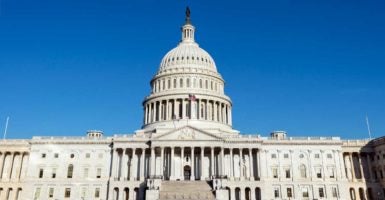 The House and Senate budget committees have held hearings suggesting an openness to a budget commission to help fix our fiscal woes.

Budget experts have suggested that the budget process has a shelf life. They say the current way of budgeting clearly isn’t working because Congress habitually fails to pass budgets and annual spending bills. Therefore, we need a new way of federal budgeting.

The good news is that a budget commission will help us get there. In fact, there are lots of different types of commissions to pick from.

I think that convening a new budget commission is a bad idea. At least a bad idea right now.

The first type of commission is a bipartisan group of policymakers that recommends suggestions for how to cut spending, raise revenues, eliminate waste/fraud/abuse, and reduce the deficit. In other words, the commission of low-hanging fruit.

In the last six years, we’ve also had the fiscal commission (or Simpson-Bowles), the Biden-Cantor group, and (who can forget?) the super committee. Each of these groups failed to convince their congressional colleagues and the president to embrace their proposals.

Sure, the committees on low-hanging fruit have advanced the ball. Each of these groups have identified their share of what, in a normal world, would be considered commonsense reforms.

For example, the Medicaid provider taxes, called a “scam” by Vice President Joe Biden (according to Bob Woodward’s “The Price of Politics”). Biden was right. They are a scam (believe me and I’ll spare you the boring details). That’s why both the Bush administrations tried to get states to cut back on them.

And what happened? Congress couldn’t even commit to cutting off a scam because states rely on playing games with those taxes to fund state programs. And if you cut off the states, that will leave them short of cash for—well, whatever.

The committees on low-hanging fruit fail because they are operating within a business model that sets them up for failure. For these committees to work, we need a commitment to less government, not better managed government.

The second type of commission would resemble the Defense Base Closure and Realignment (BRAC) model. This model would empower a bipartisan commission whose membership is made up of policy experts, although there’s nothing inherently preventing nonexperts from being represented.

There are three big problems with this model. First, the political process is no more arbitrary than the expert process. Experts bring their own preferences, assumptions, biases, and interpretations to each problem. Politicians reflect the views of their constituents and special interests.

Second, you can’t remove people from the political process if they are making decisions that affect the body politic. It doesn’t matter how deep and dark the labyrinth leads to the conference room within some random government office from which the unelected committee on low-hanging fruit meets. The group will not make decisions based on an unbiased reading of all available data.

And maybe we don’t want them to. Because the third problem is that there’s a knowledge gap. The government is bloated, complex, and full of failures. If you go about pulling a lever here or there without knowing exactly what you’re getting into, lots of unintended consequences can come out to plague you.

It’s impossible to know exactly where all those unintended consequences may lie, but you know who can provide you with a decent idea of where some of the problems could be? The special interest groups. This is because alarms go off every time anything comes close to affecting their business model. This doesn’t mean you have to listen to them, but no expert can outsmart them. Their livelihood depends on it.

The third type of commission is less interested in how to reform spending and tax programs and more interested in process. This is the stuff that excites MBAs and consultants. It’s all about the flow of information—or maybe logistics is the right word?

In other words, these commissions have experts who want to sit around and talk about how budgets are produced, why are the supply chains not working, how can we better record this or that on our balance sheet, how can funding decisions become more reliable, and how can the budget process be redesigned to get members of Congress to engage on a more regular basis. Boring stuff like that.

The budget process can be improved. This cannot be denied. In fact, I think the budget concepts commission has the most merit. We have fundamentally different budget problems today than we did 40 years ago when the Congressional Budget Act of 1974 last revamped the budget process.

But at the same time, the budget and the budget process have evolved with the times. Once a governing document, the budget is now a visionary document. This was one of House Speaker Paul Ryan’s, R-Wis., great achievements when he was the top Republican on the House Budget Committee. He did this. And he should be celebrated for it.

You have to know where you’re going before you know how to get there. Nowhere else does Congress consider its long-term priorities and actually take a vote than in the budget. The 1974 Congressional Budget Act doesn’t command the budget to be used as a visionary document. It has evolved to that point.

The problem is not that the budget has become a visionary document. It’s that Congress doesn’t care about enacting that vision. That’s not the fault of  Ryan or former Speaker John Boehner, R-Ohio. It’s that their colleagues, and maybe the American people, would rather talk a big game than do anything about it.

The budget commissions provide cover to continue the status quo until we are able to deal with these deep differences between what we say and what we do. All members of Congress can and should contribute to this discussion by producing innovative budget proposals that address head on the growth in unsustainable spending.

If members of Congress are serious about  getting the budget under control and their priorities realigned, they must start immediately. No longer can we operate by increasing spending until an external event forces Congress to come to reality.