What Does ‘The Irishman’ Have to Do With Congress’ Latest Spending Bill? 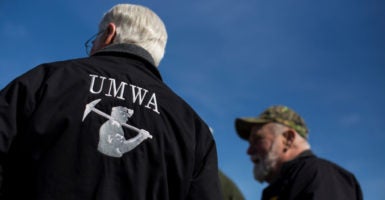 For the first time in history, Congress is poised to use taxpayer dollars to fund the broken pension promises of a private-sector union and private employers. Pictured: Members of the United Mine Workers of America attend a campaign rally for Conor Lamb, then the Democratic candidate in Pennsylvania's 18th Congressional District, on March 11, 2018, in Waynesburg. (Photo: Drew Angerer/Getty Images)

Director Martin Scorsese’s award-winning new film “The Irishman” contains some important history for lawmakers as they prepare to vote on a spending package that would provide a $6 billion taxpayer bailout to one select union.

That union is the United Mine Workers of America.

For the first time in history, Congress is poised to use taxpayer dollars to fund the broken pension promises of a private-sector union and private employers.

We can bet this won’t be a one-and-done move, however.

The next big pension plan in line for a bailout is a Teamsters’ union plan—the Central States, Southeast and Southwest Pension Fund.

Organized crime within the Teamsters union was the plot of “The Irishman.” Central to the story of the 3-1/2-hour feature film was the virtually unchecked control over the Teamsters’ pension fund by then-Teamsters boss Jimmy Hoffa, using it for mafia-related loans and personal gain.

In fact, it was fraud and conspiracy related to the union’s pension fund that landed Hoffa in prison, and after that, the Teamsters’ pension fund was under federal oversight for decades.

Of course, not all—and, hopefully, only a small fraction of—union-run pension plans have been plagued by illegal activities.

Yet, nearly all have suffered from serious mismanagement, made possible by special treatment given to union-run pension plans that were given wide latitude in lieu of more stringent funding rules required of nonunion plans.

As a result, virtually the entire multiemployer pension system is on the path toward insolvency.

Across the U.S., close to 1,400 multiemployer pension plans have collectively set aside only 43 cents on the dollar to pay promised pensions. In total, the Pension Benefit Guaranty Corporation estimates that multiemployer plans have $638 billion in unfunded pension promises.

The United Mine Workers covers fewer than 1% of multiemployer pension recipients, and its roughly $6 billion in underfunding is only the tip of the iceberg.

The Central States Teamsters pension plan has about $44 billion in unfunded pension promises, with the roughly five dozen other Teamsters-associated pensions plans adding even more.

While these two plans have drawn significant attention and consideration for taxpayer bailouts, they represent only a small fraction of all multiemployer pension plans, workers, and retirees.

It’s wrong that employers and unions were allowed to make promises without properly funding them, and it’s unfair that nearly 100,000 coal miners, 1.4 million Teamsters members, and more than 9 million other workers and retirees with private union pensions across the U.S. stand to lose a significant portion of their pension benefits through no fault of their own.

But taxpayers had no role in these broken pension promises, and despite the United Mine Workers’ claim, the federal government did not make a promise to coal miners.

The solution to the multiemployer pension crisis is not to bail out just one of more than 1,300 massively underfunded union pension plans without doing anything to improve the system.

That would either create huge inequities—with mine workers receiving 100% of promised benefits, while others receive mere pennies on the dollar—or else it would set the stage for a massive taxpayer bailout of numerous other private and public pensions.

If Congress opens the door to pension bailouts—including $638 billion in private union pensions and up to $6 trillion in state and local pensions—the price tag could reach $52,000 for every household in the U.S.

Congress needs to change the rules so that this never happens again, to maintain the Pension Benefit Guaranty Corporation solvency as a pension safety net, and to require plans to act sooner, rather than later, to minimize pension losses.

Instead of tying a selective bailout for just one union pension plan onto an end-of-the-year spending bill, Congress should provide a comprehensive solution to the multiemployer pension crisis—one that doesn’t just shift the bill to taxpayers and one that doesn’t leave 99 out of 100 pensioners in the lurch.