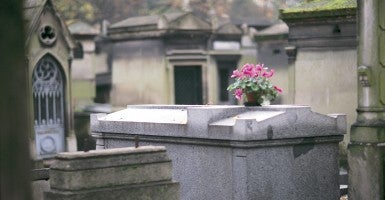 Death and taxes are two of life’s certainties, but the tax on death itself should certainly be eliminated. A recent analysis by The Heritage Foundation’s Center for Data Analysis found that doing away with the federal death tax would provide a much-needed, long-lasting boost to the nation’s economy. Indeed, it would increase economic growth by $46 billion over the next 10 years and add an average of 18,000 jobs per year throughout that period.

The federal death tax (officially known as the “estate tax”) confiscates 40 percent of the income and assets, above a specified exemption, that individuals leave behind after their death. The exemption currently stands at $5.34 million. Because of this high exemption level, the death tax hits only a small fraction of Americans directly — a fact that makes the levy popular among those who believe it is good tax policy to “soak the rich.” Yet for years pollsters have found widespread popular support for eliminating death taxes.

Perhaps Americans despise the death tax because taxing someone for dying just seems wrong. Or perhaps they recognize that income and assets seized by the death tax have already been taxed once — if not twice — by the feds. Or maybe antipathy toward the tax abounds because the American Dream instills the hope that we, too, may someday accumulate significant wealth to pass on to our children.

Americans’ disapproval of the death tax is primarily rooted in fairness, but the economics confirm that the death tax is also inefficient. For starters, some can avoid the death tax through careful — albeit expensive and time consuming — financial planning. But this kind of planning promotes second-rate decision making; in attempting to avoid the death tax, individuals spend more and invest less, while companies voluntarily restrict their growth. These substandard choices mean other companies lose out on investments that are not made, and other workers and consumers lose out on jobs, products and services that are never created.

Despite careful planning, some individuals and businesses cannot avoid the death tax. For example, many small, family-owned businesses are asset-rich but cash-poor. When the owner of such a business dies and the government comes to collect 40 percent of the assets left behind, many of those family-run operations are forced to sell off part or all of their business. This is great news for large corporations who can swoop in and buy up those enterprises at fire-sale prices, or who reap the benefits of reduced competition, but it is bad news for the employees of those businesses who lose their jobs and for the communities who lose their products, services and community involvement. Despite the devastating impacts on those it affects, the death tax brings in only a minuscule amount of federal tax revenue, making it one of the most inefficient forms of taxation. The death tax is a tax on capital, which often has been double-taxed (as regular income and dividend income) before death. Higher taxes on capital reduce the amount of investment in the economy. Lower investment means workers are less productive. Lower productivity means lower wages. And lower wages, in turn, generate less tax revenue.

Federal policymakers should heed the will of the people and kill the death tax once and for all.