Podcast: What Larry Kudlow Will Do for the Nation’s Economy 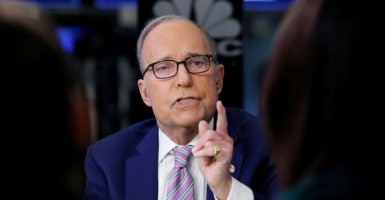 The Heritage Foundation’s Steve Moore joins us today to talk about the announcement that his friend Larry Kudlow, who worked in the Reagan administration and on CNBC, will become director of the National Economic Council. Moore and Kudlow served together on the Trump campaign, and Moore shares what he thinks President Donald Trump and Kudlow do (and don’t) have in common. Plus: We talk about the movie star moving out of the U.S. because of Trump and the school that gave detention to students who participated in the walkout yesterday.