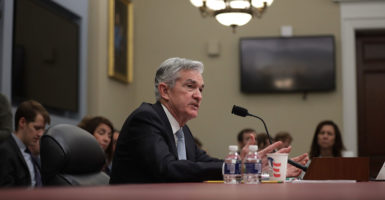 The labor market is incredibly strong and the economic outlook favorable, yet risks remain. That was Federal Reserve Chairman Jerome Powell’s message to Congress on Nov. 13.

Powell highlighted many positive features of the economic outlook, including:

Powell’s caution about unsustainable and rising debt is noteworthy. Already, the $23 trillion national debt amounts to $178,300 per household in the U.S. Add on Social Security’s $13.9 trillion in unfunded obligations over the next 75 years and Medicare’s $42.3 trillion, and total debt plus unfunded obligations rises to $614,000 per household. With a median household income of just over $63,000, that’s clearly unsustainable.

And it’s not just the already-high debt, it’s the risk that such high debt will cause a spike in interest rates, requiring drastic spending cuts at the same time as massive tax increases. According to the Committee for a Responsible Federal Budget, just a 1% increase in interest rates would raise interest costs by $1.9 trillion over the next 10 years. On a per-household basis, that’s an extra $147,300 over 10 years.

But 1% interest rate increases are mild compared to recent historical fiscal crises. In Greece, interest rates rose by about 8% from 2010 to 2011, and briefly surpassed 35% in 2012. In Puerto Rico, rates spiked as much as 2.5% in a single month. When governments can’t borrow at reasonable rates, they face extremely limited choices.

If U.S. policymakers continue to spend without restraint and put off confronting out-of-control entitlement program growth, modest reforms no longer will be possible. Austerity will be the only option.

Take Greece, for example. Its forced austerity measures of spending cuts and tax increases amounted to 40% of gross domestic product and caused the economy to shrink by 25% and the unemployment rate to rise to 27%. That austerity “saddled Greece with suffocatingly high taxes, deterring business activity and contributing to heavy emigration, especially of young and educated people,” according to a recent Wall Street Journal article.

That’s why the U.S.’ unsustainable debt is arguably one of America’s greatest threats.

Failure to address this now could mean that today’s generation of children could be the first to reverse America’s trend of upward economic movement and instead end up worse-off than their parents.

But that doesn’t have to be the case.

Solving our fiscal crisis is not easy, but it is possible and The Heritage Foundation has a plan that would balance the budget within 10 years, let workers keep more of their hard-earned dollars, and give individuals more control over their future.

As Powell pointed out, putting the U.S. budget on a “sustainable path” would boost the growth and “vigor” of the U.S. economy and give policymakers the tools to provide stability in future downturns.