The Blueprint for a Balanced Budget That Can Still Cut Taxes 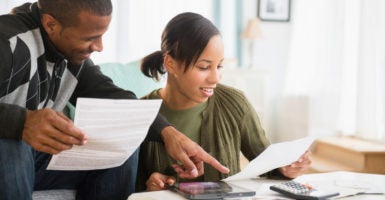 If Congress doesn’t act, Americans’ taxes will automatically increase in the coming years.

The 2017 tax cuts are temporary, and some of those taxes are scheduled to start increasing in three years’ time.

Last year, American families of four saw their taxes cut by an average of $3,000. The typical taxpayers benefited from getting to keep about $1,400 more of their hard-earned money.

One of the most important parts of the tax cuts, which support new business investments for workers and jobs, begins to expire after 2022. Three years after that, taxes increase on personal income.

As deficits increase to more than a trillion dollars annually, Congress will face growing pressure to raise taxes above where they were before the cuts.

That’s why it is imperative for Congress to pass a budget that sets our fiscal house in order so that taxes can remain low.

The blueprint shows how Congress can responsibly correct the course of federal spending by cutting $10.8 trillion over 10 years, extending the tax cuts, and eliminating deficits by 2029.

The 2017 tax cuts reduced federal income tax rates, increased the standard deduction, doubled the child tax credit, repealed the personal and dependent exemptions, and capped the state and local tax deduction, among many other reforms.

For businesses, the law also cut tax rates and removed an impediment to investment by allowing expensing.

The tax cuts allowed taxpayers to keep more of their own money, and they are one reason why our economy is healthy and wages are growing faster than they have in a decade.

Over 10 years, the typical American will benefit from more than $26,000 more in take-home pay, or $44,600 for a family of four, because of a larger economy as a result of the tax cuts and the tax cuts themselves.

By extending the 2017 law, Heritage’s blueprint recommends that taxes are cut by $850 billion over 10 years and still manages to put the federal government’s budget on a sustainable path.

Politicians in Washington like to hide special-interest subsidies in the tax code, but many tax credits are no different than the feds writing them a check.

In advocating the elimination of $650 billion of spending in the tax code over 10 years, the blueprint promotes increased transparency, gets the government out of the business of picking winners and losers, and uses the new revenue to cut taxes for every American.

The $7,500 tax credit for plug-in electric vehicles is one example of the 29 tax subsidies the blueprint recommends for repeal. Politicians in Washington are hard at work making the electric vehicle program even more generous.

The credit is currently only available for the first 200,000 cars sold by any given company. Taxpayer support for big electric vehicle sellers, such as Tesla and General Motors, has expired, leaving the credit to their competitors who are still below the sales cap.

Repealing the credit is be the best way to support the electric vehicle industry, allowing all the companies to compete on the same playing field. Instead, the electric car lobby is working to expand the credit, so that taxpayers across the country continue to pay for new cars primarily purchased by high-income city dwellers.

The blueprint also calls for repealing tax credits for higher education that have contributed to the inflated cost of college for every American and repeals tax credits for low-income housing that primarily subsidize developers, not renters, among many other credits.

Tax cuts did not cause the federal deficit. Uncontrolled spending is the sole cause of rising deficits.

Without a course correction, deficits will turn any future conversation on tax reform into a debate about how to raise new revenues.

The debt is already slowing our economy, and tax increases to cover the current deficit would threaten an economic crisis.

Congress still has options that protect future taxpayers from higher taxes, and those options are outlined in Heritage’s “Blueprint for Balance.”