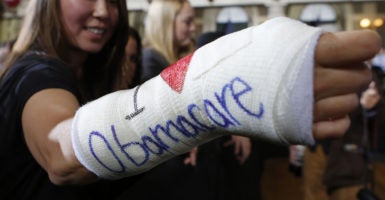 A rarely discussed aspect of Obamacare, one that appeared to give states an “exit strategy” to avoid provisions of the health care law, is likely to become more widely known next year.

But while states led by Democrat governors are beginning to see “innovation waivers” as a way to change their health care systems—and move toward proposals such as a public option—states with Republican governors are proceeding with caution.

The waivers come with strings attached by the Obama administration that some policy experts say constrain free market health care reforms as an alternative to government mandates.

“As we approach this issue and read the federal statute, all states can really do is make Obamacare worse,” one said.

Section 1332 of the Affordable Care Act allows states to pursue new approaches to health care by applying for what it calls State Innovation Waivers. The waivers, which the federal government must approve, exempt states from aspects of the health care law related to private insurance, including individual and employer mandates, tax credits, and exchanges.

However, for a waiver application to win approval from the Department of Health and Human Services, the proposed state program must adhere to four requirements, which the Obama administration released in December. The program must:

The waivers become available at the start of 2017. Nine states have enacted laws related to Section 1332 waivers, according to the National Conference of State Legislatures.

Lawmakers in two states with Democrat governors, Minnesota and Rhode Island, introduced legislation that would use waivers to pursue “health care for all” models such as what are called public options.

Early drafts of the Affordable Care Act, popularly known as Obamacare, included a public option, or a government-run plan that competes with private insurers. Lawmakers, however, eventually stripped it out.

Now, President Barack Obama and other Democrats have been pushing for creation of a public option as choice and competition declined under Obamacare. Health care experts point to Section 1332 waivers as a way for Democrats to accomplish that goal at the state level.

“It’s something that’s very feasible, to create a system that enrolls more and more people with more and more benefits, paid for by taxpayers,” Nic Horton, a senior research fellow at the Florida-based Foundation for Government Accountability, told The Daily Signal. “I don’t know if that was the goal, but that is an outcome that’s possible.”

In addition to Minnesota and Rhode Island, officials in California also plan to apply for a Section 1332 waiver.

Gov. Jerry Brown, a Democrat, signed a bill directing state officials to submit an application to the federal Department of Health and Human Services for a waiver that would allow illegal immigrants to purchase insurance on California’s state-run exchange, Covered California.

The state released a draft of its waiver application in August. More than 35 members of California’s 53-member congressional delegation sent a letter to the Obama administration earlier this month urging it to approve California’s request for a waiver.

But Republican state lawmakers have approached Section 1332 with hesitation, as health care experts warn that the federal regulations have policymakers walking a thin line.

“How do you construct a waiver that is cost neutral and doesn’t shift any more cost, but also saves the state money, while also covering all the same benefits and all the same people, and not shifting cost onto consumers?” Horton said.

“That’s quite a puzzle, and I don’t know if any state is going to figure it out,” he added.

Though more than a dozen states have moved to take advantage of State Innovation Waivers, Vermont was the first to flirt with the idea of using one.

In 2011, Gov. Peter Shumlin, a Democrat, signed legislation that would move Vermont toward a single-payer system—where the government pays for health care costs—by 2017 and use a Section 1332 waiver to implement the plan.

Shumlin, however, abandoned his quest for a single-payer system three years later, after the state Legislature estimated his “Medicare for all” proposal would cost the state upward of $2 billion annually.

Since then, more than a dozen states have passed legislation related to State Innovation Waivers.

According to the National Conference of State Legislatures, lawmakers in 17 states filed bills authorizing or exploring the use of the waivers.

Just two states, Hawaii and Vermont, submitted applications to the federal government, according to the Centers for Medicare and Medicaid Services, the agency that oversees Obamacare. At least one more—Massachusetts—publicly released an application for Section 1332 waivers.

In a SHOP exchange, businesses with fewer than 50 employees can purchase insurance for those employees. Vermont is asking the government to waive that requirement and allow small businesses to purchase plans straight from insurers, instead of through the exchange.

Other states, like California and Colorado, have discussed applying for State Innovation Waivers to implement proposals that already have garnered public attention.

Colorado voters will weigh in Nov. 8 on a controversial ballot measure, Amendment 69, which creates a government-run health plan called ColoradoCare.

If voters approve Amendment 69, state officials would need to ask the Obama administration for a waiver to implement ColoradoCare.

Some health policy experts view Section 1332 waivers as a way for opponents of the health care law to improve or eliminate aspects of the law they dislike.

In an April 2015 post for the Journal of the American Medical Association, Stuart Butler, a senior fellow in economic studies at the Brookings Institution, said pursuit of State Innovation Waivers would provide an “exit strategy” to states with Republican governors.

But few of those states have released proposals, as states with Democrat governors have.

Kentucky Gov. Matt Bevin, a Republican, expressed an interest in using the waivers to make changes to his state’s Medicaid program.

Bevin campaigned on rolling back the expansion of Medicaid spearheaded by his Democratic predecessor, and said in December that his administration would pursue a Section 1332 waiver to overhaul the Medicaid program.

But guidance from the Department of Health and Human Services released that month raised questions about whether Bevin could use the waivers for Medicaid.

The Republican governor unveiled a plan to reform Kentucky’s Medicaid system in June, but that plan didn’t include use of a Section 1332 waiver. Bevin’s administration isn’t ruling out their use in the future, though.

“While we would not preclude pursuit of some type of Section 1332 waiver in the future, we chose to utilize an 1115 waiver to develop Kentucky HEALTH, an innovative and transformative Medicaid plan designed to meet the unique needs of Kentucky’s population,” Garry Gupton, a spokesman for Bevin’s office, told The Daily Signal in an email.

When used in the Medicaid program, Section 1115 waivers allow states to implement changes that don’t adhere to federal rules for the program.

Lawmakers in Ohio and Arkansas—states led by Republican governors—also have expressed interest in pursuing Section 1332 waivers.

The Ohio Legislature passed legislation last year directing the state superintendent of insurance to apply for a Section 1332 waiver that would eliminate both the individual and employer mandates and establish its own system that “provides access to affordable health insurance coverage” for Ohio residents.

And in Arkansas, lawmakers floated the idea of making changes to the Essential Health Benefits package available under Obamacare, as well as the cost-sharing reduction subsidies.

Horton, the Foundation for Government Accountability scholar, lives in Arkansas and isn’t optimistic the state will succeed.

“[To] legislators in Arkansas, Republicans, that are proposing this, this is not a path toward less welfare, less dependency, lower burdens on taxpayers,” he said of the waiver process. “It’s hard to see anything conservative that could come out of the restrictions.”

Despite the efforts in Arkansas, Kentucky, and Ohio, health policy experts say the Obama administration’s guidance on how the waivers can be used has compounded such reforms in red states.

“Section 1332 waivers were called State Innovation Waivers, and right now, there’s very little innovation that can be done given the constrictions the administration put on it,” Rea Hederman, executive vice president at the Ohio-based Buckeye Institute, told The Daily Signal. “The net effect is that the Obama administration has built up really high guardrails for Section 1332 waivers that constrain how states can reform health care in a free-market direction.”

Butler and Hederman both are former policy experts at The Heritage Foundation.

‘When the Bill Comes Due’

Before the Obama administration released its December guidance on Section 1332 waivers, Massachusetts Gov. Charlie Baker, a Republican, and New Hampshire Gov. Maggie Hassan, a Democrat, of the National Governors Association sent the departments of Treasury and Health and Human Services letters urging them to “provide states with the guidance and flexibility needed” to pursue waivers.

“Section 1332 offers governors the chance to work with their state agencies and stakeholders to pursue innovative coverage and delivery system initiatives tailored to the unique needs of their states,” their letter, which included a list of recommendations from the National Governors Association regarding the waivers, said.

But now, states—and particularly states with Republican governors—have little wiggle room in terms of what they can do to change their approaches to health care.

The added burden of knowing that states can be on the hook for billions of dollars in the future, should any plan approved by the federal government cost more than anticipated, is a deterrent for policymakers, Hederman said.

“Right now, you’re already seeing cost overruns with the Medicaid expansion [in some states],” he said. “It’s a question of when the bill comes due.”

Horton, with the Foundation for Government Accountability, agreed:

I would pose this to lawmakers: Why would you even want to go down this path? As we approach this issue and read the federal statute, all states can really do is make Obamacare worse. They can add cost to taxpayers and add people to welfare through this waiver process, but they can’t make Obamacare better.

Hederman, though, says he remains optimistic.

His advice to states is to hold off on pursuing Section 1332 waivers until 2017, when a new administration could roll back the Obama administration’s rules or repeal Obamacare altogether.

States then would be able to regain control of their health care systems, he said, under the nation’s founding concept of federalism in which states retain powers not listed in the Constitution.

“If 1332s are modified, states have a great opportunity to take back control. If the Affordable Care Act is repealed, they’ll have the ability to take back all control,” Hederman said. “It’s incumbent on the next administration to allow federalism to have a chance.”