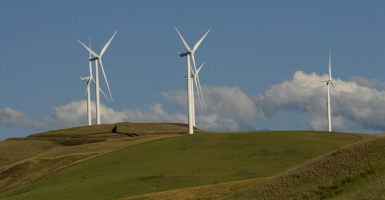 Instead of driving technological improvements to lower costs, a company may settle for producing a technology that is just barely competitive with the government’s help. (Photo: Francis Joseph Dean/Deanpicture/Newscom)

Members of Congress are preparing to be quite active during the lame-duck session. That’s good news for cronies who want to use the political system to secure handouts but bad news for taxpayers and the economy.

Proponents of the subsidies are arguing that they were mistakenly left out of last year’s tax extenders bill, which included five-year extensions for the wind production tax credit and solar investment tax credit. Whether the omission was intentional or not, leaving them out of the bill was a small piece of good news for the tax code.

But hardly anything ever dies a permanent death in Washington, especially when companies attach themselves like leeches to the taxpayer. In general, subsidies start off innocently enough, as companies lobby to members of Congress that they have the next best innovation, and they need five years of special tax treatment to get off the ground.

A business model built around taxpayer-funded subsidies distorts the incentives that drive innovation.

As that five-year window begins to close, the companies are back on Capitol Hill arguing for an extension. After a few decades of this, America has a bungled system where the federal government picks winners and losers among technologies and diverts tax cuts away from lower rates and other pro-growth policies that would help all Americans instead of a select few businesses.

Some of these alternative energy companies will undoubtedly succeed. But it is a mistake to attribute their success to government’s favoritism. New technologies have ample opportunities to provide reliable and affordable power, and many of these companies have investment backing from some of the world’s largest financial companies. The government policy is nothing more than unfair favoritism.

Besides, as we’ve seen in the past, some of these alternative energy companies will undoubtedly fail. Even with a leg up from the taxpayer, the technologies will not be competitive against conventional sources of energy.

In these instances, not only is the federal government’s subsidy unhelpful, it could also likely contribute to the demise of the company. Instead of driving technological improvements to lower costs, a company may settle for producing a technology that is just barely competitive with the government’s help.

A business model built around taxpayer-funded subsidies distorts the incentives that drive innovation. Politicians should not dictate how private investment is spent by doling out tax credits to the politically connected. Rather than tack on tax extenders to must-pass pieces of legislation, Congress should eliminate all preferential tax treatment for all energy companies.

Energy tax credits aren’t the only lame-duck concern for bad energy policy. Another red flag is a massive energy bill that would greatly extend and expand the federal government’s role in the energy economy.

The bill, currently in conference, has more subsidies for alternative energy technologies, taxpayer-funded jobs training programs, a coal program that spends hundreds of millions of dollars on technology development and commercialization, a permanent reauthorization of the Land and Water Conservation Fund, and many other bad provisions.

The lame-duck session provides members of Congress an opportunity to evade accountability. For retiring members or those voted out of office, the term “elected officials” no longer applies. The lame-duck session shields returning members as well, since they’ve just been re-elected and do not have to worry about the repercussions of taking a bad vote.

This is not the way to govern, nor are these policies the way to have a robust, competitive energy economy.