More Power to the States Will Enhance US Energy Dominance 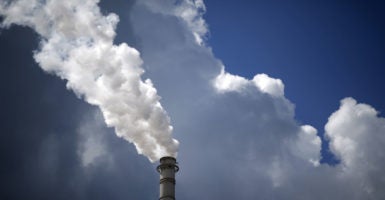 Steam is released from a Citgo Petroleum refinery in Sulphur, Louisiana, on June 12. In 2014, the Louisiana oil industry generated $44 billion for the state economy and another $36 billion when including related infrastructure and refining activity. (Photo: Jonathan Bachmann/Reuters/Newscom)

In the midst of a growing global economy, the world’s demand for energy is booming.

Producers in the United States have stepped up to meet that demand. The U.S. has been the world’s leading natural gas producer for nearly a decade. Domestic oil and gas production has increased 60 percent since 2008.

Despite America’s energy dominance and the economic benefits that accompany it, an abundance of natural resource potential in the U.S. remains untapped.

Why? A key reason is the federal government owns and manages those resources. Federal regulations and federal land ownership have rendered vast quantities of recoverable oil and natural gas onshore and offshore either inaccessible or costlier to extract.

The current leasing and permitting process has frustrated people of all political beliefs. On average, the federal processing of an application for permit to drill in the last year of the Obama administration was 257 days, while state processing has typically been 30 days or fewer.

While the Interior Department is working tirelessly to reduce permitting delays, this massive time disparity prevents market forces from working effectively. When prospective drillers have to wait many months to get approval, the prospect of drilling in a timely manner can often be implausible.

Even though many federal proposals are approved, fluctuations in the price of oil combined with a long waiting period create the type of uncertainty that often prevent prospective drillers from even attempting the process. Authorizing states to manage onshore and offshore resource production for a greater percentage of the revenue than the current system will create a new and better system that permits industry to better respond to changing market conditions.

Last week, the House Natural Resources Committee held a hearing to discuss enhancing state management of natural resources on federal lands and waters. Draft legislation introduced by the committee would empower states to have more control over the leasing, permitting, and regulations of oil and gas production.

It would also authorize a state to approve or disapprove of each lease sale offered in federal waters if the area is within the state’s administrative boundaries. The amount of royalty revenue a state would collect would depend on how many lease blocks a state approved.

State control, local governance, and private-sector participation would result in more accountable, effective management. While the federal government can simply shift the costs of mismanagement to federal taxpayers, states have powerful incentives for better management of resources on federal lands. State governments can be more accountable to the people who will directly benefit from wise management decisions or suffer from poor ones.

Opponents of the proposed legislation said this bill would give oil and gas priority over other economic interests a state may have. For instance, coastal states have stated concerns that offshore drilling would possibly hurt their tourism and fishing industries.

But states like Louisiana have proven you can have your oil and seafood, too. In 2014, the Louisiana oil industry generated $44 billion for the state economy and another $36 billion when including related infrastructure and refining activity.

In addition to energy production, seafood and tourism industries stand out as significant contributors to Louisiana’s economy. Louisiana represents 30 percent of the commercial fishing for the continental United States and are substantial producers of shrimp, oysters, crawfish, and crabs. Annually, the industry creates $2.4 billion in economic growth for Louisiana.

These industries work hand-in-hand for the economic benefit of the state.

Opponents of the draft legislation have also held inconsistent views on the principles of federalism. The proposed legislation would empower states with a choice that, under the current system, they simply do not have.

Under current law, the Department of Interior could easily make choices for all states and allow for energy exploration in federal waters, regardless of whether those states want it or not. The proposed legislation would at the very least give states a say in the decision.

A Washington-centric approach to management stifles creative, collaborative solutions to competing interests that could be resolved at local, state, or regional levels without the added baggage of national political battles and federal regulatory processes. While states and local communities may not always make perfect decisions, the best environmental policies are site-specific and situation-specific and emanate from liberty.

The Natural Resources Committee should be commended for introducing draft legislation that would improve the current process by engaging the appropriate stakeholders and better aligning incentives for economic development and environmental protection.