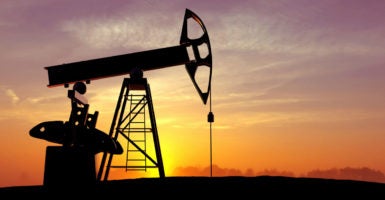 In 2014 the International Monetary Fund reported that Saudi Arabia needed oil prices of at least $106 per barrel to maintain the government spending level. (Photo: iStock Photos)

Owen Morgan is a member of the Young Leaders Program at The Heritage Foundation.

The recent decline in oil prices has squeezed the finances of nations whose economies are dependent on oil exports.

Even wealthy producers such as Qatar and Saudi Arabia have been forced to cut government spending significantly. Although that means their citizens will receive less free stuff from the state, it just might lead to more economic prosperity for them overall.

Saudi Arabian nationals receive generous welfare benefits, e.g. highly subsidized gasoline, water, and electricity. They also get free health care and schooling, along with low interest government loans. And they pay no taxes. Of course, all those benefits make them highly dependent on the government. And the freedom they give up is a very high price to pay.

Government spending in Saudi Arabia increased significantly over the last few years, which was affordable when oil prices were well over $100 per barrel. However, now oil sells for around $40 per barrel.

In 2014 the International Monetary Fund reported that Saudi Arabia needed oil prices of at least $106 per barrel to maintain the government spending level.

Today, the House of Saud recognizes that oil prices might not come back any time soon. To cut back, it has increased gasoline, diesel, and kerosene prices, although they remain far below international averages. It also increased prices on water and electricity. In the future, Saudi leaders plan to implement a sales tax and privatize health care and education.

Saudi Arabia isn’t the only oil producer suffering. Thanks to substantial oil and natural gas reserves, Qatar is the wealthiest nation in the world per capita. But, because the country produces few products other than oil, its budget was also hard hit by the collapse of oil prices.

As a result, Qatar is ending its fuel subsidies to reduce its budget deficit. This reform represents a significant change of policy from 2014, when the IMF reported that Qatar had the highest per person energy subsidies in the world.

Saudi Arabia and Qatar are not alone—several other nations have recently cut subsidies that had been in place for a long time. These include big oil producers United Arab Emirates, Kuwait, and Oman.

Unfortunately, civic virtue was not the reason the leaders of those countries cut subsidies.

Fuel prices in those countries increased because there was no money left to subsidize them. The leadership wasn’t motivated because their economists told them that study after study has shown that subsidies misallocate resources and unfairly benefit the politically connected. On the contrary, the regimes desperately want to buy off their citizens with subsidies to keep them from demanding reforms to their undemocratic governance systems. Reforms that might cause them to lose power. Still, the changes they have introduced will increase economic freedom in their countries, whether they like it or not.

Research from The Heritage Foundation’s Index of Economic Freedom demonstrates year after year that countries with fewer subsidies experience faster rates of economic growth. So, further subsidy reform would be a great way for Saudi Arabia, Qatar, and other oil dependent countries to boost their economic freedom scores—and their prosperity.

The people of the United States should take note. Although our country has a comparatively freer economy, our government also interferes with it through subsidies.

Americans would benefit if their government stopped picking winners and losers in industries such as health care and agriculture. Eliminating those subsidies would unlock economic growth and contribute to greater prosperity for all.