House Republicans Call for Accountability on ‘Bidenflation’ and Energy Crisis 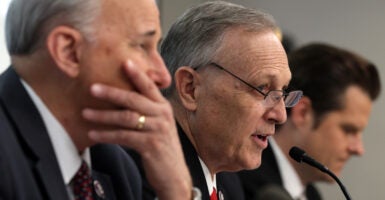 “We became the No. 1 producer of oil and natural gas and become a net energy exporter for the first time in 70 years,” Perry told a panel of House Republicans Tuesday during a forum on inflation and the energy crisis held at The Heritage Foundation, the parent organization of The Daily Signal.

“For those of you who assumed that those two accomplishments led to an increase in emissions, you’d be wrong,” Perry, also a former Texas governor, continued, speaking remotely by video. “We actually led the world in emissions reduction. It’s also important, I think, to understand the impact that it had on the American family—$2,500 a year is what they saved in reduced energy costs. And that’s even more impactful for lower-income families.”

“When you think about it, the Biden administration is … taking the opposite approach,” Perry said. “They’re waging a war on American energy and they’re trying to tax and regulate the United States into prosperity. … President [Joe] Biden has taken the U.S. from dominance to dependence.”

The Biden administration not only shut down pipelines and made domestic drilling more difficult, Perry said, but it has weaponized federal agencies, such as the Securities and Exchange Commission, to push for the Democrat Party’s energy policies.

“The weaponization of climate policies, particularly when it comes to the environment and social governance, as ESG standards that they talk about, they’re limiting our American energy exploration and production,” Perry said.

“They’re canceling pipelines and infrastructure projects,” he added. “This administration is weakening the American energy security, our influence around the world, and our independence.”

Perry said it’s time to redefine the ESG acronym in a way that will promote job growth rather than shrink the economy to “energy, security, and growth.”

Rep. Andy Biggs, R-Ariz., said the ails of the economy were caused by Biden’s policies, noting the $1.2 trillion bipartisan infrastructure bill and the $1.9  trillion American Rescue Plan that contributed to inflation.

“Joe Biden has made clear that the buck stops literally anywhere else,” Biggs said, adding, “They’ve called inflation transitory. They blame [Russian President] Vladimir Putin. They blame corporate greed. But with Democrats in charge of the House and in the White House, the proposed remedies have only made the matters worse.”

Biggs noted research that said about $4 billion from Biden’s American Rescue Plan ended up going to fraud such as scams operating out of Russia, China, Nigeria, and Ghana, while some unemployment checks went to people who were employed.

Biggs asked Kathleen Sgamma, president of Western Energy Alliance, a petroleum advocacy group, about the Biden administration’s claims the oil companies have thousands of leases and permits and are choosing not to drill.

“There are about 12,000 leases that are not producing right now out of something like 23,000 leases and I would note that we’re in court defending 5,900 of those leases, and it’s really hard to produce on a lease if it’s tied up in litigation,” Sgamma told the panel, speaking in person.

There are about 8,800 permits that have been approved but not used. There are also 4,500 permits that we have requested but that are being held up. And environmentalists just sued last week on 3,500 approved permits.

So these were permits that the Biden administration actually approved and they’ve sued on that because they don’t want to see any production. So those are going to be tangled up and it’s going to be hard to develop all those permits.

Rep. Lauren Boebert, R-Colo., asked during the hearing about the Biden administration’s insistence that energy prices are not the president’s fault but a global problem.

Alex Epstein, president of the Center for Industrial Progress, first said the contention seems plausible on the surface.

“Imagine if Joe Biden had come into office in 2021 and said, ‘Hey, there’s this dangerous anti-fossil fuel movement. As soon as we recover from this pandemic lockdown, there’s going to be way more demand and supply. We need to reject the Paris Agreement. We need to stay out of it and we need to tell others to get out of it,’” Epstein said.

“If you had opposed the global anti-fossil fuel movement and encouraged energy freedom around the world, you would have had a proliferation of oil production, natural gas production, coal production, and you wouldn’t have these problems at all,” he added.

“We increased median income value—that’s the exact middle, not rich people—median income by $6,000 in real terms in four years,” Moore said. “If we persist with this inflation rate that we have right now, which is now running 8.6% in Biden’s first two years in office, he will erase all of the income gains that we saw in [President Donald] Trump’s first four years.”

“We’ve actually signed a letter to McConnell and McCarthy that said we will not vote to fund any for any government funding that does not, at a minimum, secure the border, end the vaccine mandates, and unleash American energy again, even at a minimum, before we even evaluate the merits of any spending,” Norman said.