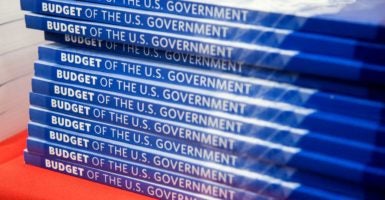 A recently released congressional report shows the depth of American fiscal problems and the need for lawmakers to tackle the nation’s dire financial situation.

On Tuesday, the Congressional Budget Office released its 2016 Long-Term Budget Outlook. The annual publication projects the levels of U.S. spending, taxes, deficits, and the debt for the next 30 years. The report paints a grim picture of the nation’s current fiscal path where deficit and debt levels will continue to rise to unsustainable levels. In the next 10 years, the CBO projects that the national debt will rise from its current level of 75 percent of gross domestic product to 86 percent. The CBO estimates that in less than 20 years, debt will surpass the peak level of 106 percent of GDP recorded just after the end World War II. By 2046, public debt will nearly double, skyrocketing to 141 percent of GDP if the current path remains unchanged. According to the CBO, such high levels of debt “would have serious consequences for the nation’s budget and economy”.

Over the past 50 years, debt held by the public has averaged 39 percent of GDP and was as low as 35 percent as recently as 2007. Deficit levels are also projected to rise sharply over this period, from the current rate of 2.9 percent of GDP to more than 8 percent of GDP by 2046.

Two primary factors will continue to weigh heavily on the budget if left unchanged—autopilot (entitlement) spending and interest payments on the federal debt. Social Security and Medicare spending currently account for about 8.7 percent of GDP. By 2046 CBO estimates that they will increase to 12.9 percent of GDP.

These programs are in deep trouble. A recent report by Heritage Foundation economic analyst Paul Winfree, found that just 2 percent of all spending accounts within the federal budget are driving the federal budget’s unsustainability.

That study also finds that the growth in those programs—accounting for 60 percent of total spending over the next 10 years—cannot be supported by future tax increases. Reform should be a priority to support seniors, the poor, and individuals with disabilities without allowing Social Security, Medicare, Medicaid, and Obamacare to drive the nation into a debt crisis.

Interest rates are also expected to rise from the unusually low levels experienced over the past several years. This increase, along with ever growing deficits, will greatly increase interest payment on the federal debt.

The good news is it is not too late to put the country back on a sustainable path and get debt and deficit levels under control. The CBO projects that by 2046, debt levels could get back to or below their historical average if Congress puts in place policy changes that would either decrease spending or raise revenues by 2.9 percent of GDP. This comes out to about $560 billion in 2017. The Heritage Foundation’s “Blueprint for Balance: A Federal Budget for 2017” would cut deficits by more than $9.1 trillion over the next decade while giving a real tax cut to Americans at the same time.

Unfortunately, Congress and the president decided to take a pass on beginning the critical work to put the budget on a path to balance during President Barack Obama’s last year in office.

Last November, Congress and the president agreed to the Bipartisan Budget Act of 2015, which raised the fiscal year 2016 and fiscal year 2017 discretionary spending caps by an additional $80 billion over two years.

Congress had a chance to rebuke the deal and pass a budget resolution at the Budget Control Act level of $1.04 trillion or lower for fiscal year 2017, but neither chamber ever brought a budget resolution to the floor and failed on promises to restore regular order. In the meantime, deficit and debt levels continue to grow; inching the nation closer and closer to a financial crisis.

It is clear that more taxes are not the answer. In its report, the CBO once again estimates that tax revenue will be above the historical average as a share of the economy. This is further proof that deficits are driven by too much spending, not too little tax revenue.

Politicians who argue for higher taxes to reduce deficits would rather take more of the American people’s hard-earned money than do the necessary difficult work of cutting spending. Not that raising taxes would help. Higher tax revenues always chase higher spending, leading to an even worse deficit problem.

The CBO notes that this year’s long-term budget outlook reflects the first time that the projections account for the macroeconomic effects of fiscal policy. Among them, rising federal debt, higher marginal tax rates, and the Affordable Care Act will reduce incentives to work and contribute to slower labor supply growth.

The CBO’s grim forecast shows that the time for lawmakers kicking the can further down the road has passed. Congress should pass a conservative budget that reduces the size and scope of the federal government and enacts necessary reforms to Medicare, Medicaid, and Social Security that will put the country on a more sustainable path.